Home»Culture»Alphabet to Algorithm: Ashland’s Blackstone Audio Speaks for the Future of the Printed Word
Culture

Alphabet to Algorithm: Ashland’s Blackstone Audio Speaks for the Future of the Printed Word 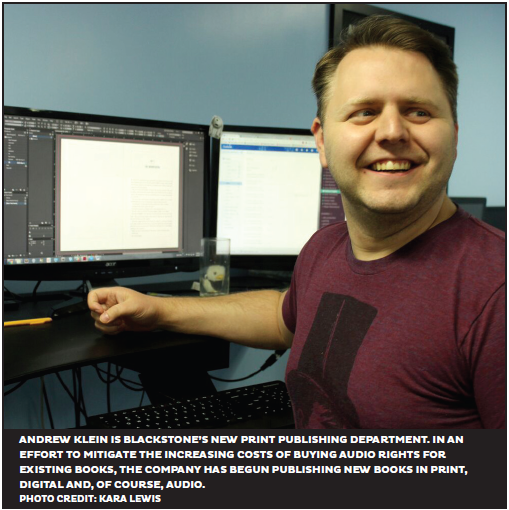 Twenty-five years ago, a young voice actor named Grover Gardner stepped into a studio and began reading aloud into a reel-to-reel tape recorder. Audiobooks were not all that common at the time, but this recording of Shelby Foote’s three-volume The Civil War became a Blackstone Audio staple and a best seller. For the visually impaired, the busy, and anyone else who prefers to listen to books rather than read them off the page, the stories, strategies and battles of this epic period in American history were accessible for the very first time.

Gardner eventually came to work at Blackstone Audio’s production studio in Ashland. This year, the studio decided to re-release his recording of The Civil War for a whole new generation of listeners. A digital remastering simply wouldn’t cut it. So, leaving tape and reels far behind, Gardner is re-reading the tome aloud in his soundproof room, while his sound engineer follows apace on the computer monitor, stopping every few sentences to make corrections on the fly. Welcome to the future of books.

Lest we consider this to be a niche market, let the award-winning, “velvet-and-sandpaper” voice of Grover Gardner set the record straight:

“This is the biggest growing area of publishing right now.” Not eBooks — portable, yes, but who has time to actually read anymore? Audiobooks are exploding, and the cost of doing business is just one indicator.

“It used to be that big publishers would give away the right to record their books for almost nothing,” says Gardner. “Now they’re more likely to keep those rights, and do their own audiobook production in-house.”

Not that this shift has slowed down Blackstone Audio in the slightest. “We have no competitors,” Gardner notes. That’s because Blackstone doesn’t just record voices and edit sound. They design the book jackets. They build apps. They burn CD audiobooks onto discs, pack them into boxes folded on-site, and ship them off by the hundreds every day.

This vertical integration is part of Blackstone’s strategy for success, and their success is a win for the written word in the digital age. Why? Recently created algorithms now allow huge audio files to be compressed and download to any mobile device. This has made audiobooks available to more people, but it also puts the rights to the actual content into fewer and fewer hands. 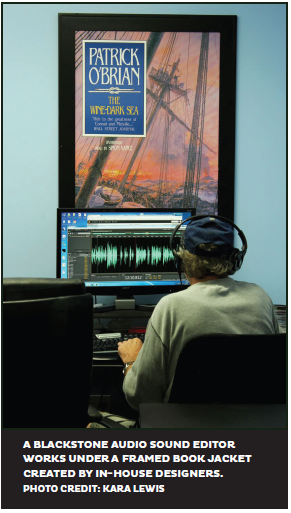 Audible, a subsidiary of Amazon, dominates the audiobook-download market, streaming millions of titles to users around the world. While Blackstone does use Audible’s channels to distribute their content, the books available through Blackstone’s own streaming service and online purchasing site, Downpour.com, offer one key difference: They’re DRM-free.

DRM, or Digital Rights Management, is a way of keeping digital content from being copied and redistributed, and it’s how all of Audible’s books are sold. In other words, the files are not really yours after you buy them. You have to keep your account in order to listen to the books, and you can never make a copy on your hard drive or a CD.

By allowing Downpour users to save, copy and share their audiobooks freely, Blackstone is rejecting the increasingly restrictive philosophy of publishers, movie studios, major record labels, and others worried that once they sell a copy of something, digital reproduction will keep them from ever selling it again.

Will this business strategy work? Time will tell. Like the Civil War, the fight for the survival of creative industries in the digital world will be a long one. One thing’s for certain: Fans of the original recording of The Civil War can finally retire their tape deck. Grover Gardner’s voice may have matured over the years, but it’s still highly listenable, and his narration of America’s defining moments is not going away anytime soon.

Alphabet to Algorithm: Ashland’s Blackstone Audio Speaks for the Future of the Printed Word