AIFF: Teddy, Out of Tune 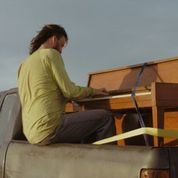 Noted for its gentle assessment of individuals on the fringe of the American west, the feature film Nomadland has received far-reaching applause and accolades—and a few Oscar nods.

Teddy, Out of Tune deserves just as much. A film that is both crude and elegant, the camera follows some of the same geographic, demographic and emotional landscape as Frances McDormand does in Nomadland. The title character, and vehicle for the story and for this film is Teddy, who drives his battered pick-up truck north along the Sierra Nevada foothills, with a piano strapped in the bed, playing songs along the way. He is on his way to deliver his mother’s ashes to Canada. His final trip with her, he explains.

But the destination is far less important than the journey.

The movie is presented as a documentary film, although Drew Connick who plays the wild-eyed Teddy is an actor, and the film is loosely and partially scripted. Connick is deeply convincing as thirty-something vagabond, portraying a bone-deep kindness that is equally child-like and manic—and one that also has been demented by abuse and trauma. He talks about playing “Moonlight Sonata” to Redwood trees because what a shame they have lived for a thousand years and never heard that song, and he fantasizes about playing a concert on Mars, and he dances with Burning Man abandon alone in the desert. But he displays instability bordering on insanity; a fragility that is pure humanness and pain.

The acting is suburb, and the film does an amazing job rooting Teddy in earnestness; partially because it is, indeed, rooted in reality. The character Teddy follows his journey, leapfrogging from friend to friend along back roads and small towns, but some/many of the “friends” he visits along the way are actual real people (not actors) in their actual real, mostly rural settings. Moreover, although a film like Nomadland (not to bash the fine, fine film, but as a point of comparison) is billed as an “indie,” Teddy was produced at a fraction of that cost, and did so in 20 days over 2000 miles of traveling.

That grit and authenticity shine through. This is a story about art, trauma, and the thin line between both emotional and mental pain and pleasure—and, it is a story loving produced and told. PB

AIFF: Teddy, Out of Tune