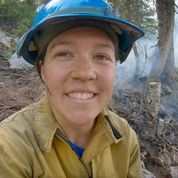 Anchor Point (Available April 19-20)
The tone for Anchor Point is not incendiary, although the subject-matter is: Fighting forest fires and, more specifically, the challenge of two women to fit in—or not—to the male-dominated culture and policies of the U.S. Forest Service.

To examine those (burning) questions, the documentary shadows two women, each at different points in their career:  Kelly Martin, a veteran crew chief, and Lacey England, mid-career after a decade as a boot-on-the-ground fighter and wondering whether to stay with it. Their stories each are unique, but with plenty of overlap to tell a story bigger than its individual pieces. Moreover, the timing for the documentary is keen: For southern Oregon audiences, it is an insightful behind-the-front-lines vantage from recent fires; and, more generally, the film enters the broader discussion about why diversity matters.

In the movie’s introductory scene, England spells out the importance for understanding that 100-years of male-dominated policy of fire suppression has limited options for prevention; and, then she continues to address that the machismo responsiveness of attacking forest fires could perhaps stand evaluation and a different approach. It is a compelling argument, and the next 90 minutes patiently chronicles the story of these two women—moving about their personal and professional lives with curiosity and ease.

Anchor Point is not a preachy film. Although there is dramatic POV scenes rappelling from helicopters and stomping through burning juniper forests, the film is calm and considered, and simply presents two stories, and connects them to a larger dialogue. PB