AIFF: A Kaddish for Bernie Madoff 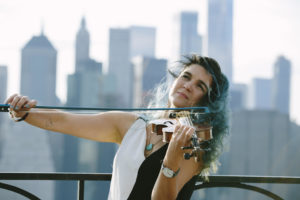 It is not a Hollywood movie pitch: “A chamber-rock opera about the intersection of finance and spirituality.” And, oh yeah, at the center of the story is disgraced financier Bernie Madoff and his decade-old con job.

Perhaps not a formula for a blockbuster, A Kaddish for Bernie Madoff, directed by Alicia J. Rose, is a post-modern masterpiece and a top-shelf contemporary art film: Dabbling in Yiddish musicals, flirting with a morality play and splashing in synchronized swimming, Portland-based musician and artist Alicia Jo Rabins stars in a spellbinding docu-drama that, yes, re-tells us about Bernie Madoff, but does so by carving out the story’s emotional and spiritual contours.

The storyline unfolds Madoff’s $18 billion Ponzi scheme. At the time, Rabins, a poet, musician and part-time Torah teacher, had a peculiar artist-in-residence in a Manhattan skyscraper that happened to be in proximity to Wall Street’s financial happenings—and it is this juxtaposition of art and religion to commerce that creates friction, insights and magical realism. At times, the story is told with the gossiping tone of a Jewish grandmother, and at other times following the narrative of a giddy investigative journalist; the combined effect is an emotional, fun-spirited and spiritual journey.

The timing for the movie is interesting, though: 2008/9 feels distant, and financial wizardry and Wall Street con jobs may not seem like the biggest of our worries right now.

But, Rabins points out, that Madoff really isn’t the point of the film. “It’s not a bummer film about a giant fraud,” she explained in an email interview. “It’s a mystical detective story about the human heart, with Madoff’s fraud as a jumping-off point.” She added, “This piece is about the power of the imagination to help us make meaning during difficult times. It’s not really about Bernie Madoff,” she offered, “it’s really about healing, and balancing seriousness with humor, and the cyclical nature of life – the inevitable ups and downs.”

And, that artistic intent is timeless. And, this film hits its target spot-on. PB

AIFF: A Kaddish for Bernie Madoff