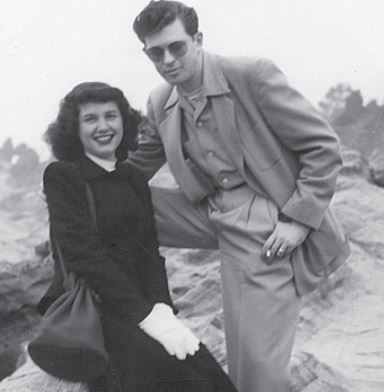 A great marriage is a work of art, and the charming Harold and Lillian: A Hollywood Love Story is a heartfelt tribute to a couple that put their hearts and souls into a lasting creative and romantic partnership. Harold Michelson had an enviable career as a storyboard artist, art director, then production designer, on famed projects such as Ben Hur, Who’s Afraid of Virginia Woolf, Catch-22, and Star Trek: The Motion Picture. His work was complemented and paralleled by Lillian’s career as one of the most sought-after story researchers in the movie colony.

The documentary extends a long-term project of director Daniel Raim, who is building a great body of work celebrating the hidden labor of talented Hollywood craft workers. As in his Oscar-nominated short, The Man on Lincoln’s Nose, Raim takes a long walk through the studio backlot, putting us next to the storyboard artists, researchers, and production designers whose influential work is almost entirely missing, or even uncredited, in our histories of Hollywood. In Harold and Lillian, Raim weaves these workplace realities with the story of a life-long romance between two fixtures in the studio system—loaded with intimate details like Lillian’s dauntless protection of their autistic son, and the goofily sweet hand-made cards Harold made for her on each anniversary. The collaborative nature of their work, and all movie work, shines through—Lillian’s research into the behavior of seagulls leads us to Harold’s sketches of signature frames from Hitchcock’s suspense masterpiece, The Birds, or her details on the milieu of upper-class Angelenos shows up in the exquisite, now iconic, frames Harold imagined for Mike Nichols and cinematographer Robert Surtees in The Graduate.

Interviews with Lillian and Harold, and their many collaborators and protégés, anchor the film with amusing, and at times heart-breaking, anecdotes from a life tumbled by cruel twists of fate, and the bare-knuckle facts of life in entertainment. Legendary indie distributor Zeitgeist Film is bringing the film to AIFF, and co-founder Nancy Gerstman explains why the company is so enthusiastic: “Harold and Lillian were so essential to movies that it’s possible that certain films couldn’t have been made without them, and yet no one outside of the industry knows who they are! So, the possibility of getting their fascinating work out there was compelling to us.”

They are bringing us a remarkable portrait of a complete world and a complete marriage: Harold, who seems a stand-up guy right out of central casting, an artist-dedicated to his craft and smitten with his wife in equal measure, and Lillian, a no-nonsense survivor who proudly brandishes a letter from a rival calling her a “baby-faced killer.”