Home»Sound»Music News»Accidentally Avante Garde: Junk Parlor Set Out To Be Gypsies, But Not a Gypsy Jazz Band
Music News/Sound

Accidentally Avante Garde: Junk Parlor Set Out To Be Gypsies, But Not a Gypsy Jazz Band 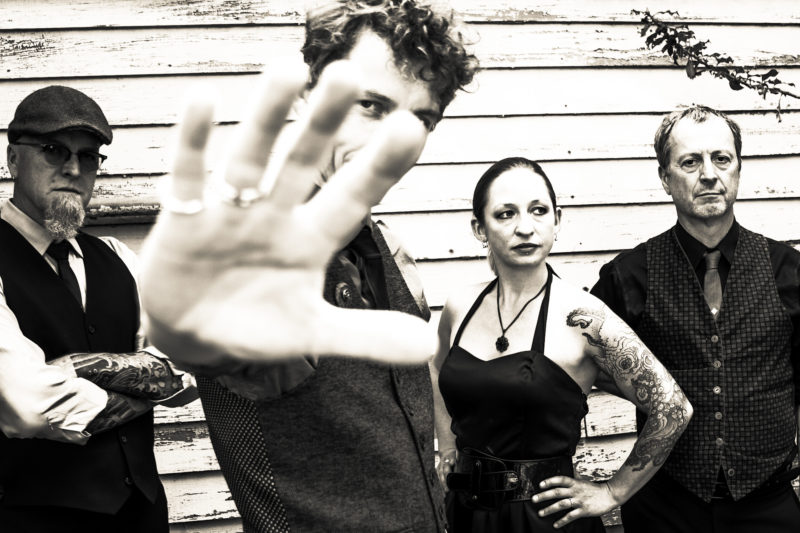 According to its frontman, Jason Vanderford, Junk Parlor was formed by accident. Its members were part of a regular gypsy jazz jam at a Petaluma wine bar, and one day one of them booked the band that wasn’t yet a band a gig despite having neither songs nor a name. But they threw those together quickly and things took off from there. The Bay Area group has put out two collections that are equal parts Django Reinhardt and British Invasion, and is at work on a new single and video, in-between tour dates. The band’s current outing will bring it through Southern Oregon for a pair of shows at The Haul in Grants Pass on Sat., January 14, and at Oberon’s in Ashland on Sun., January 15. Vandeford took the time answer a few questions for The Messenger to preview the show.

Rogue Valley Messenger: Your music could be described as period or retro. Why look back instead of forward? Was it deliberate or something that arose naturally from the combined musicianship?

Jason Vanderford: I purposefully didn’t want to create a “Gypsy Jazz” or a “Balkan” or a “Rock” band. Since we decided to actually take this seriously, I wanted to create something new. I started writing songs that I wanted to hear, originals. Lots and lots of originals. When you are doing your own thing, you make up the rules. One thing I know is that a good band will play to the strengths of the musicians in it.

RVM: Your 2015 album, Melusina, was a big departure from your debut, Wild Tones,  dropping the rock and focusing strictly on gypsy jazz. Your new recording, Mick Jagger’s Heart, seems to be walking that back. Could you speak to that?

JV: Melusina had more of an instrumental focus because of the response we got in the bellydance community with a couple songs from our first record.. so we went with it. Our next album is going to be a mix again, with more emphasis on the vocals. It’s two sides of the same coin. We love all the directions we go, even though some songs sound drastically different that others.

RVM: Are there unique challenges that come with playing in more niche genres like you do?

JV: Everything is a challenge. But it would be boring if it were easy. Generally my main focus always is to put on the best show we possibly can. There are always critics and folks who don’t understand what you are doing, but there are usually more folks who just love it. Junk Parlor really doesn’t sound like any band that I have ever heard.

JV: I always feel a kinship to Punk because at its core it doesn’t follow any traditions. It is generally rebellious and extremely passionate. And that is how I like to judge music. Not by technique or how many notes one plays or how clever a harmony is. Music can have all of that and still feel completely flat. That said, I’m not so sure that we would even technically be considered “punk” so I don’t really know where we fit in. Indie rock maybe?

Accidentally Avante Garde: Junk Parlor Set Out To Be Gypsies, But Not a Gypsy Jazz Band