A Wild Train Ride: Talking Geography With the Lower 48 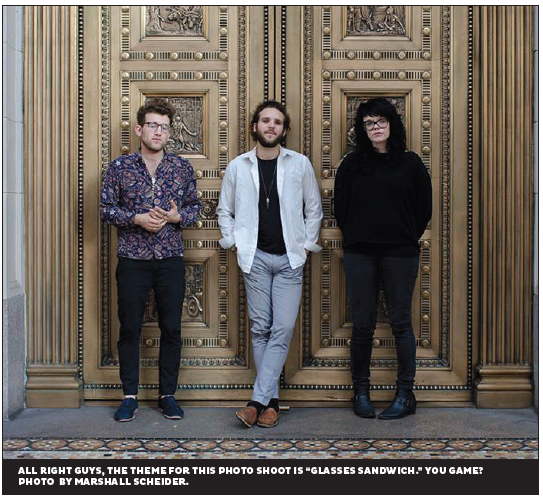 It’s not new news that Portland is a breeding grounds for talented musicians.

But bands like the sixties-styled pop-rock trio The Lower 48, who will be performing at the G Street Bar and Grill in Grants Pass on Wednesday, March 2, may also be testimony that Oregon also is drawing talent away from other music cities, like Minneapolis, which has held one of the strongest music scenes in North America for the past three decades.

“We moved [to PDX] from Minneapolis when we were very young, we were 18,” says guitarist and singer Ben Brandon. “It was just a place on the west coast that wasn’t Minnesota.”

Since their transplant to Oregon the band has worked to carve out a spot in a competitive scene. “It took us a while to surface,” says Brandon. “here’s a lot of bands here so it took a couple of years to get together and learn how to be adults.”

But they have—and, hitting stride, the band is aiming to take their place in the spotlight with the release of their second studio album, Hot Fool, a record that draws influence from a laundry list of classics and with a sound harkening back to the golden years of rock and roll.

“We definitely can’t help but love the Beatles, the Stones, the Kinks, Tom Waits, and the Velvet Underground big time,” says Brandon. The band’s sound bustles with those influences, and produces a sound more robust than what a three piece band normally produces.

“We try and sound like five or six people, everybody is singing and playing pretty much the whole time,” says Brandon. Maintaining such sonic diversity can be hard, but straying from adversity has never been a part of the Lower 48’s creative process. “It was challenging to learn how to do this with three people but I think it made us better musicians,” he says.

In spite of the confidence with the sound from their first album, Brandon assures that fans will be treated to a pleasant departure from previous albums; the Lower 48’s latest album, Hot Fool, is set to release March 31 and their west coast is currently under way.

“There’s a lot of different types of songs and processes we used to record them. At first I was worried. Does this sound like 12 different bands? But I definitely don’t think it does, there is a consistent common thread.”

And, as much as their two albums differ in sound—but have common denominators—their live shows are as much a familiar derivation.
“It’s a blast” says Brandon. “It’s a really wild train to be riding when we are playing live.”

A Wild Train Ride: Talking Geography With the Lower 48