Nickel’s main value is its ability to form alloys, or combinations of metal, such as stainless steel. Recently, another alloy proved stronger in Southwest Oregon. Over 170 businesses (from breweries to guide services), 47 conservation and outdoor recreation groups (from Friends of the Kalmiopsis to the Native Fish Society), 19 communities (from Crescent City to Cave Junction), over 200 scientists, four native tribes, and thousands of independent citizens combined to stop development of three nickel mines proposed for the Klamath-Siskiyou region. Although numbers are not exact, local salmon presumably also supported the effort. 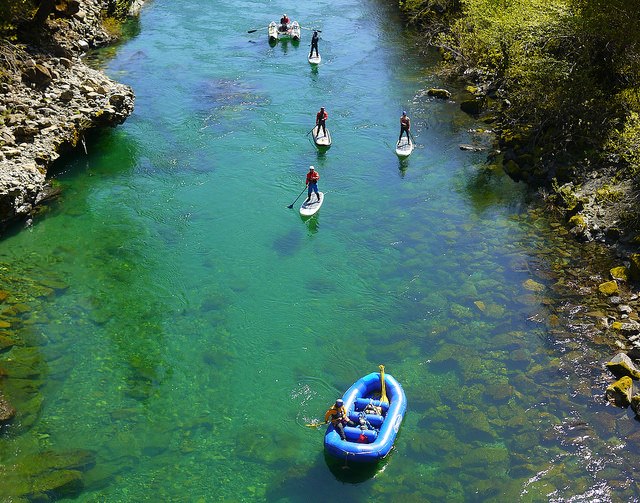 Where? The mining claims are adjacent to the Kalmiopsis Wilderness in the headwaters region of the North Fork of the Smith River, Rough and Ready Creek, Baldface Creek, and the Illinois and Chetco Rivers. Guiding and tour businesses, recreational boaters and anglers, and the health of the salmon population especially depend on the pristine quality of these waterways, as well as local communities which source their drinking water from them.

What Happened?: On December 30, BLM Public Land Order No. 7859 withdrew over 100,000 acres of Bureau of Land Management and National Forest lands in the Klamath-Siskiyou region from the exercise of mineral rights. In effect, it stops mining, including the proposed nickel mines, for a minimum of 20 years.

What’s Wrong with Nickel Mining? A previous nickel mine operated in Oregon, the Glenbrook Mine in Riddle (closed in 1998). The low-grade deposits there (2%) required strip-mining, or large scale removal of the earth’s surface, to produce viable amounts of nickel. Eventually, importing nickel ore from New Caledonia, 6000 miles across the Pacific, proved more cost effective than strip-mining in Oregon. The Southwest Oregon deposits likely hold 1% nickel, or half as rich as the Glenbrook Mine.

The remote location of the claims in the Klamath-Siskiyou would also have required smelter operations adjacent to the strip-mines. The EPA’s Toxic Release Inventory annually cites hard-rock mining as the largest source of toxic pollution in the country. When Glenbrook Mine prepared nickel ore at its facility in Coos Bay (mid-1990s) for smelting in Riddle, Coos Bay residents not only experienced nickel ore dust coating homes and neighborhoods but respiratory ailments, too. Barbara Ullian, a Grants Pass resident who has learned far more about geology, hydrology, mining law, the nickel mining industry, and the ecology of the Klamath-Siskiyou region than she ever expected over decades of following this issue summarizes the situation: “You cannot build a mine on top of it (headwater and aquifer recharge areas) without getting polluted water.”

The Catalyst: Nickel is also valuable as a catalyst in chemical reactions. When prices spiked in 2007, mining companies reconsidered the low-grade deposits in Southwest Oregon. As for the people who lived, worked, and played there, the possibility of mining caused a different reaction: “it was shocking to the people who depend on the rivers,” says Jeanine Moy, Program Coordinator at KS Wild, the non-profit dedicated to the Klamath-Siskiyou’s preservation and restoration. Three companies filed mining claims on National Forest and BLM lands. In 2014, the Red Flat Nickel Corporation (owned by British investment firm, St. Peter Port Capital) acted on its claim and filed an application to conduct test drilling. David Lacey who lives in Hunter Creek outside of Gold Beach and owns South Coast Tours describes his reaction. “I received the notice (of the application) from the Forest Service… I was nervous, a little bit scared.” The testing site was seven miles from his house, upstream.

The Reaction: Lacey was not alone in his alarm. Word spread from neighbor to neighbor and town to town, and a coordinated effort to prevent nickel mining quickly emerged. Hundreds attended public meetings over 2015 and 2016, and tens of thousands submitted comments to the BLM and Forest Service. “The prospect of having a nickel mine in their backyard,” says Joseph Vaile, Executive Director of KS Wild, “drove people’s concerns.”

Senators Markley and Wyden, and Representatives Defazio and Huffman heard their constituents’ voices and devised a long-term solution: The Southwest Oregon Watershed and Salmon Protection Act. The bill, if passed, would permanently withdraw mineral rights from the affected Klamath-Siskiyou region. More immediately, the bill’s introduction led to the BLM’s 20 year withdrawal. “Everyone is very, very grateful for the decision, ” says Barbara Ullian, the Grant’s Pass resident, “and very, very grateful to the Congressional delegation in working to make it happen.”

The Future: The Public Land Order is in effect for now. According to Vaile, KS Wild and other conservation organizations will monitor any administrative or legislative action which might alter the results. “It will be hard to undo something with such broad support,” Vaile believes. The value of the Klamath-Siskiyou region will continue to reside in its pristine waters and wilderness.