A Thespian Take on A Christmas Story: Barnstormers Theatre Tackles the Classic 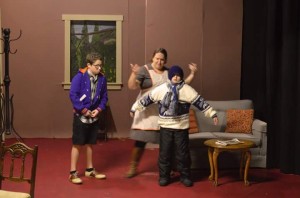 We’ve all seen it. Every Christmas. Without fail. But on stage? Intriguing. Barnstormers Theatre hails the Christmas season in proper A Christmas Story style on December 4.

The beloved tale of Ralphie, Randy and family and their crazy Christmas antics make families across America feel downright normal, and over the past 32 years since its original film release, A Christmas Story has been cherished—and quoted. (“You’ll shoot your eye out!” “I TRIPLE-dog-dare you!” “You were always jealous of this lamp!” Just to name a few.)

Bruce Allen, director of the Barnstormers production written by Philip Grecian and sponsored by Nelson Maler, CFT, is confident that they can do the original film justice—and then some.

“The cast is really energetic,” he says. “It will be a warm holiday experience for everybody; it matches the movie almost 100 percent. Every iconic, hilarious moment will be in the play: the kid getting his tongue stuck to the pole, the car breaking down. What you are getting with A Christmas Story on stage is a way more theatrical send-up of the film.”

In addition to actual family members in the play (Randy’s mother is actually his mother in real life), there will also be the actual leg lamp (“It’s a major award!”) up for raffle. Tickets will be for sale throughout the play, and the winner will be drawn at the final show on December 20.

This will be Allen’s directorial debut at Barnstormers; he has performed most recently at Barnstormers in A Day in Hollywood, A Night in the Ukraine and Play it Again, Sam. He also played Willie Wonka in 111 Evelyn’s Willie Wonka and the Chocolate Factory this year. But he spends most of his time as the Theater Director at Brighton Academy in Grants Pass, a position he has had for the past six years. And though he is used to working with kids, he admits that he has “really enjoyed” working with kids and adults in this production.

A Thespian Take on A Christmas Story: Barnstormers Theatre Tackles the Classic