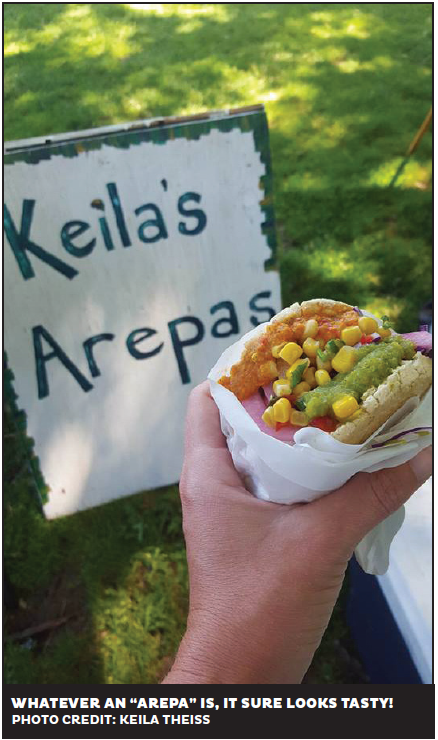 Keila’s Arepas (pronounced “eh-ree-puhs”) owner Keila Theiss greets everyone with a smile that’s eager to educate anyone who is curious about what an “arepa” is. She explains that she first tried the South American meal in Hawaii, and she instantly needed to know how to make it herself.

“We tried out a bunch of different types of arepas,” she says. “Arepas are really versatile. You can pretty much do anything with them.”

What looks like a sandwich that can fit into the palm of one’s hand is actually a meal that can satisfy anyone’s hunger pains for quite some time. Theiss’s arepas are a masa bread packed with shredded pork, cotija cheese, avocado, corn salsa, and pickled onions. She says getting the bread right is the most crucial component. The bread is thick and almost tasteless, crumbling like a tamale does upon chewing.

The lack of flavor in the masa isn’t a disadvantage, however; instead allowing what’s been stuffed between the slices to provide the flavor. Adding so many toppings to something can often times run the risk of overloading the senses, but the toppings in this arepa all work together to provide a distinct taste.

The diced avocado is at the perfect ripeness that is absorbed by the masa. As I took my first bite the avocado smashed against the top of my mouth while my teeth worked on the masa and pork, mixing all the different textures together.

The cotija cheese adds a sharp bite and is softened by the warmth of the pork. Perhaps the best part about it are Theiss’s homemade sauces.

While one sauce is primarily cilantro, the other contains jalapeños, adding a spicy kick to the otherwise mild meal. She coats both sides with the sauces, which seep down into the pork and the masa, providing a wonderfully fresh taste.

The arepa is served with a jicama salad, containing pineapple, red peppers, cilantro, vinegar, and lime juice. Though it might have been a little too bitter from the vinegar, it was a nice pairing with the arepa for its sharper flavor.

My advice when you purchase Theiss’s arepa is to not immediately walk away and peruse the other stands while eating, but continue to add the sauces to the sandwich as you work your way past the toppings and to the pork. You’re also going to want to stay for Theiss’s welcoming company and arepa education.

In the two months Keila’s Arepas has been serving the South American meal, Theiss has sold more than 1,000 sandwiches. An arepa is seven dollars for the pork and veggie option, with an extra dollar for avocado. A breakfast option of a two egg stuffed arepa is also available at the stand.

To distinguish Keila’s Arepas from other stands at the Rogue Valley Growers and Crafters Market in Hawthorne Park, one must look for a small sign with green lettering and a hotdog cart. Keila’s Arepas frequents the Ashland, Medford, and Jacksonville farmers markets, so follow your nose to the source of the dreamy pork and maize smell.