A Shared Picture Is Worth A Million Dollars: CircleSnap Is the Next Big Thing 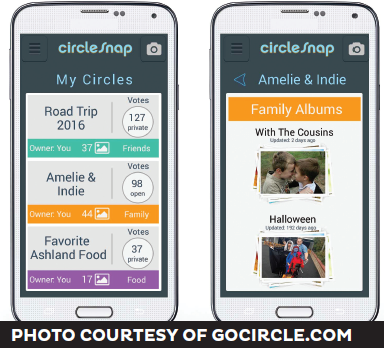 CircleSnap holds the charm of one of those business ideas so practical and obvious it seems as if it should already exist. Essentially, a picture-sharing App, CircleSnap collects, stores and organizes photos by theme—and not just your photos, but collects photos of your kid from other family members, or of a concert from other people attending. “This app can replace your photo albums, year books, and Google Drive folder,” founder Brandon Kirkland asserts. In their first interview, Kirkland gives an exciting behind-the-scenes glimpse of the next billion dollar company.

Rogue Valley Messenger: Was there an “a-ha” moment that you realized you either/both wanted to design a new App, and/or start your own business?

Brandon Kirkland: At the time of my idea, there was no cloud storage five years ago to easily store images/videos I took of my kids, but then Dropbox came out. But even after Dropbox, it still wasn’t that easy to save and organize the photos/videos of my kids. One other thing that I wanted to do was to allow collaboration around a photo/video album (folder) so that other people who were a part of my kid’s lives were able to add images and videos too, like their grandmothers. There was nothing like this on the market and there still isn’t.

RVM: What is your business background?

RVM: In some ways, this seems like an obvious idea. That is, it seems like something that would already exist.

BK: I ask myself this a lot…. what am I missing? Why haven’t the big guys done something like this yet?!? Facebook’s memories is new and close to what we’re doing, but not exactly. And, there are about a dozen Apps on the Android/Apple app store that allow you to save your images in an organized album all nice and tidy, but they’re missing the bigger point…. collaboration! If you have the option to see an album of images/videos of a great concert you went to, where you took pictures to look at later, would you choose that option, or the CircleSnap option where everyone at the concert has the ability to add to your experience capturing in a 360 degree view of things you might have missed out on? We’re betting most people will choose Option 2.

RVM: What is your competition? Is it other mega-companies, like Google, or are there other small companies around the country trying to start up similar Apps?

BK: Even though no one is doing what we’re doing, we still have competition. When I think about mobile app competition, it’s more than does my app do what your app does, it’s really about competing for eyeball time. For example, the opposite of my app is Snapchat, send a moment and have it disappear after a brief amount of time. Even though we’re different, I’m competing for time spent on a mobile device, and I need to add more value to the user.

RVM: What is it about southern Oregon that you think supports startup businesses?

BK: We love Southern Oregon, but there is good and bad when it comes to tech startups. The bad: Not enough mobile/internet technology experts; a lot leave for the Bay Area or Portland. The good: Less distractions, room to live, breath and innovate. I think that a slow pace style, like we have here in Southern Oregon versus Silicon Valley gives us time to be methodical in our decisions, versus a quick paced reaction; you might remember Aesop’s Tortoise and the Hare story.

A Shared Picture Is Worth A Million Dollars: CircleSnap Is the Next Big Thing