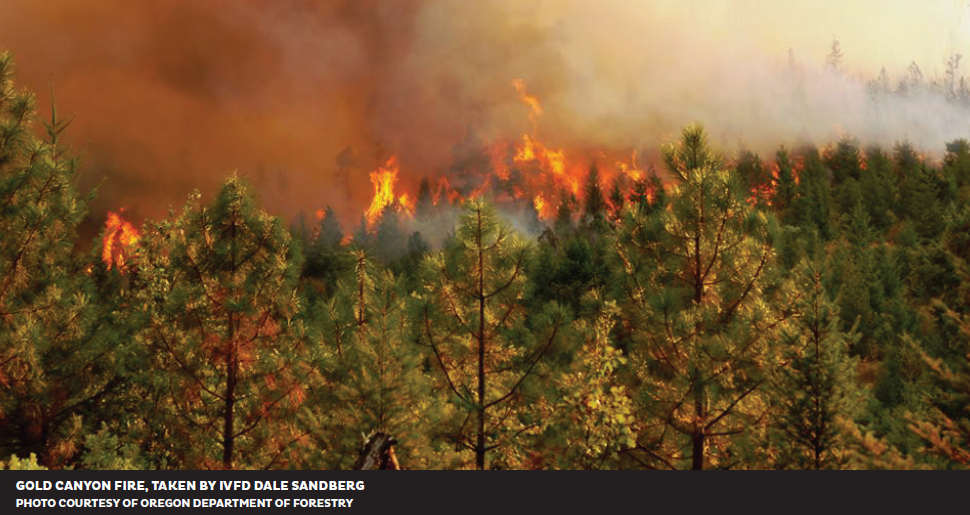 It wasn’t a huge fire in terms of the massive forest fires that have ransacked swathes of California this summer. But for the 100 or so homeowners in the area west-by-southwest of Grants Pass, they were not so worried about the size of the so-called Gold Canyon Fire, but simply wanted fire fighters to put it out before it reached their homes.

Starting last Tuesday, a fire quickly spread from a few acres along the Redwood Highway near Selma, Oregon to nearly 200 acres and threatening dozens of homes. Fire crews responded quickly, and with air support, contained the fire, and no homes were caught up by fire.

But over, the past decade, forest fires have been increasingly common—and also an increasing menace to homeowners in Oregon. According to a 2013 Forest Service study, wildfires in the western states are expected to double by 2050. In part because of drier winters, and in part because homes are being built closer to wildland areas, these fires are increasingly threatening residents and causing evacuations, as well as immediate and massive responses from fire fights. All of which is particularly bad news in terms of what funding is currently available to fight and prevent forest fires.

In the 1990s, the average annual cost for fire fighting and prevention was almost $1 billion. Since 2002, that number has swelled to $3 billion, and according to NBC News, in 2016 the U.S. Forest Service is using more than 50 percent of its current budget to fight fires.

But even more than the soaring costs, the mechanism to provide these funds to the U.S. Forest Service, and Departments of Interior and Agriculture is being criticized as shortsighted, and not sustainable. The current budget setup for federal agencies fighting fires is Peter robbing Paul: As the expense to fight bigger and more fires has increased, federal agencies, with increasing frequency, have been pulling funds from fire prevention accounts, meaning that the accounts being drawn down are the same ones that fund fire prevention work, like clearing brush.

Moreover, in hearings this July at the U.S. House of Representatives, representatives from the U.S. Forest Service protested that the current levels of funding for firefighting will fall $490 million short in 2017.

Yet, in spite of the far-reaching recognition of the problem, there has not yet been a long-term solution put in place.

For the past several years, U.S. Senator Ron Wyden, (D-Ore., chairman of the Energy and Natural Resources Committee), along with Sen. Mike Crapo, (R-Idaho) have been trying to swashbuckle forward bills that would dramatically improve funding for wildland fire fighting by shifting the funding source to Federal Emergency Management Agency (FEMA), the agency that manages other natural disasters—like hurricanes, tornados, earthquakes and floods—and does so with much fewer restrictions and with access to deeper federal pockets. And, most keenly, would do so without pulling fire fighting funds from fire prevention funds.

Although seemingly simple and sensible, lawmakers from the Pacific Northwest and California—the ones most eagerly interested in more stable funding to fight forest fires—have noted resistance to moving the funding source to FEMA from states in flood, tornado and hurricane regions, like Louisiana, which currently receive FEMA support for their natural disasters.

In spite of bipartisan support, this idea for funding forest fire fighting was dropped in December during final negotiations from the 2016 budget.

In a recent trip to Bend, Sen. Wyden again picked up the torch for securing funding for fighting forest fires, and discussed the latest idea for this goal, the Wildfire Budgeting, Response and Forest Management Act of 2016.

That bill is waiting approval for a full Senate vote.