A Puck and a Brew: Southern Oregon Adult Hockey Association Gets a Boost from Local Suds 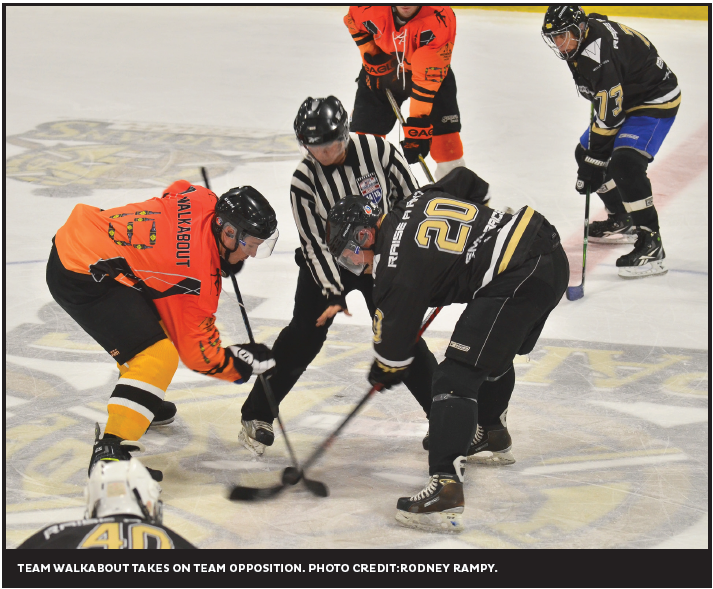 Like peas and carrots. Like Sonny and Cher. Like rainbows and sunshine. Hockey and beer just plain go together. And the two have been teaming up in the Rogue Valley.

SOAHA President and Wisconsin-transplant Richard Hobbins has seen adult hockey in the Rogue Valley come a long way since the formation of the Association in 2011, but this year brought some long-awaited changes.

“I’ve watched hockey here go through so many different phases,” he says. “This is our first year with the Brewery Hockey League—four teams with a full season of 32 games. If the breweries hadn’t stepped up and helped us out, none of this would be happening. It has made hockey so much stronger in the Valley. In bigger cities, breweries tend to support hockey teams, and hockey players drink beer, so that works out.”

“Caldera was the first on board,” says Hobbins. “They designed their jerseys, and they turned out pretty crazy—purple and lime green. And Walkabout’s are bright orange—like nothing you ever see in hockey.”

They are currently halfway through their season, with the next game on January 10 and the games continuing on Sunday evenings at the RRRink in Medford through April. The 180 members in the league come from all walks of life—doctors, teachers, police, some former junior level players—ranging in age from 18 to 70-something.

“It is an eclectic group of people who come together,” says Hobbins. “They love the sport and they are also a part of the community. Most of the adults who join say, ‘man, I wish I played this as a kid; this is so much fun’.”

And this isn’t the NHL, with the tactical use of fighting.

“In the time that I have spent watching hockey, I can’t emphasize enough how special this Valley is when it comes to hockey,” says Hobbins. “I’ve witnessed two guys on the same team drop gloves and fight. There are hot tempers, it gets a little snippy out there, but they usually bring it down. The best part is that they are out having a beer with each other afterwards saying that they are sorry.”

“We ask, ‘how do we make this better for the community?’” says Hobbins. “The breweries are the first stage in doing more things in the years to come.

Though they do some traveling to tournaments right now, Hobbins says that they hope to expand to incorporate breweries in Roseburg and Klamath and make a regular traveling team in the future, starting with adding two more teams to their ranks next season.

A Puck and a Brew: Southern Oregon Adult Hockey Association Gets a Boost from Local Suds