Home»News»A Prognosis for the Healthy Climate Bill: Better than a snowball’s chance of passing this legislative session
News

A Prognosis for the Healthy Climate Bill: Better than a snowball’s chance of passing this legislative session 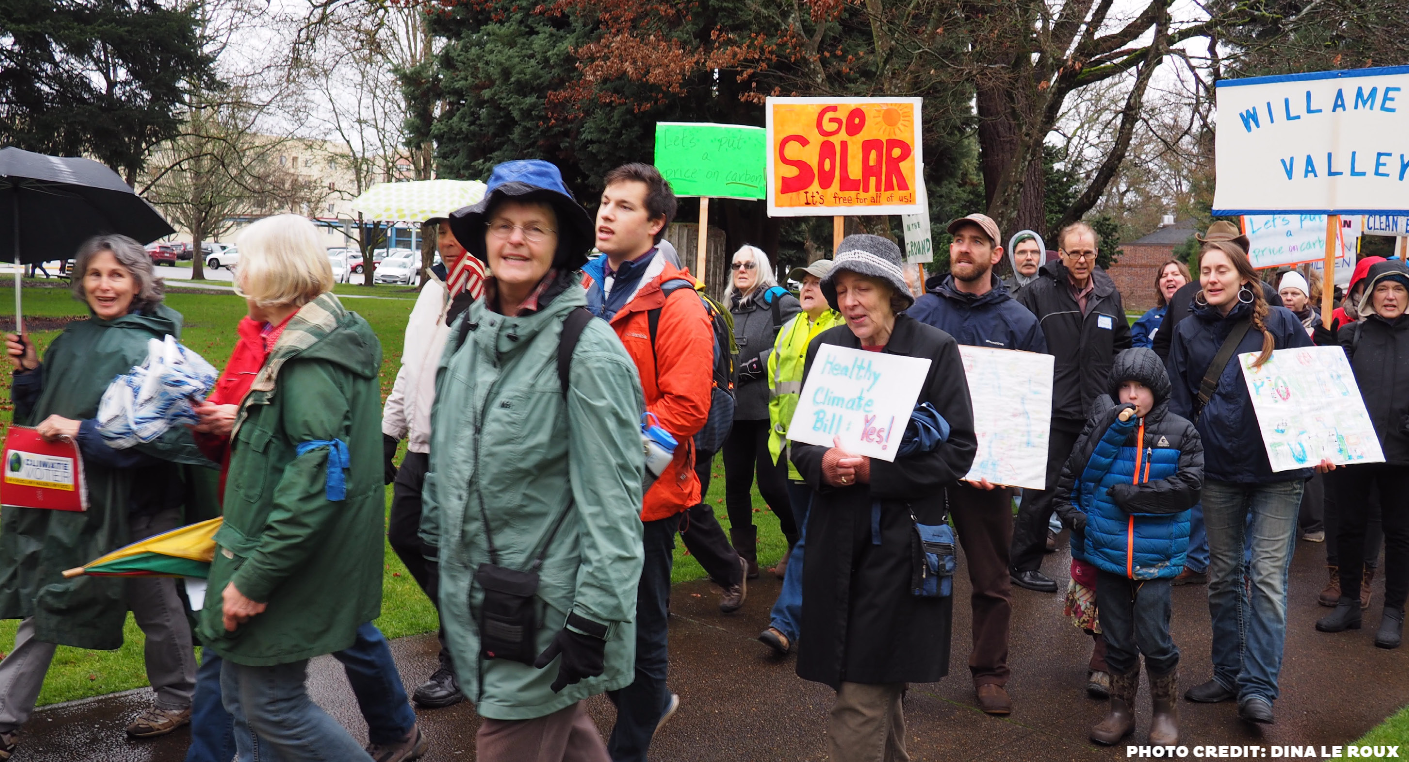 Like a salmon swimming upstream, the proposed Healthy Climate Bill seems to have a battle ahead of it in the Oregon legislature. Although the messages have been ringing for the past few decades—the world is warming up! polar caps are melting!—that urgency has not translated strong legislative measures to correct the problem of carbon emissions and, to make matters worse, gasoline prices have dipped below $2 a gallon taking away many people’s incentive to curb their petrol-burning habits. And, to make matters even worse, last Tuesday, the Supreme Court curbed President Barack Obama’s plan to regulate emissions from coal-burning plants.

But activists are dissuaded. They claim that this session at the Oregon legislature can and will be a game-changer, and that the Healthy Climate Bill will be a, well, healthy step in the right direction.

On a rainy day in early February about 70 concerned residents traveled from southern Oregon to Salem, and joined hundreds of other residents from around the state lobbying lawmakers to enact the Healthy Climate Bill. At its core, the proposal would not stop industry polluters from polluting; but by placing a price tag on emissions, it would push them towards cleaner operations.

Interestingly, after decades of environmentalists banging the drum for lower emissions—the planet is choking!, peak oil!, it’s the right thing to do!—the Healthy Climate Bill, in spite of its name, seems to accept the economic framing (as opposed to the moralistic or even environmental) argument for why businesses need to stop pumping pollutants into Oregon’s air.

Nearly a decade ago—about the same time that The Inconvenient Truth was ringing alarm bells that the world is doomed if we don’t change personal and industrial habits—Oregon adopted HB 3543, which pledged to reduce greenhouse gas emissions 10 percent of 1990 levels by 2020 and 75 percent by 2050.

Yet, in spite of swarms of Prius taking to the roads since then and households switching to energy-efficient light bulbs, emission levels have barely budged. And now, concerned residents are recognizing it is a now-or-never moment, and like a gambler doubling down or a race-car drive stepping on the accelerator (to use perhaps an errant gas-burning metaphor), the Healthy Climate Bill essentially is looking at the 70 most noxious polluters in the state, and providing a cap for reasonable emissions; anything above that level, they will need to pay for.

“(A) regret among the climate concerned community is that voluntary efforts simply do not seem to work,” explained Alan Jorunet, a co-facilitator for Southern Oregon Climate Action Now (SOCAN).

The exact mechanism for reining in this pollution—or, at least charging for it—is a carrot-and-stick approach. The largest emitters of greenhouse gases—those responsible for more than 25,000 metric tons—would bid at auction for “Allowance” to pollute. In California, where a similar program is already in place—and already succeeding in bringing emission levels way down—the price for those “Allowances” is roughly $13 per ton.

“The need to buy permits to pollute will serve as an incentive to polluters to seek alternative non fossil fuel energy sources,” points out Jorunet.

He goes on to provide another perspective on that calculation. “It is worth noting,” he wrote in an email interview with the Messenger, “that the ability of polluters to use our air as a free dumping ground for their waste means that we collectively have been subsidizing their profit margin to the tune of about $13 per ton of emissions. In effect,” he added, “this bill simply removes that subsidy and asks polluters to pay the real cost of their activity, and charge that in the price of their product so the price accurately reflects the cost of the product.”

But the Healthy Climate Bill does more than simply put a fee on polluting; it takes funds generated by the fees to what Jorunet calls “promoting a transition to lower energy need and cleaner energy.”

More specifically: The revenue raised largely will be spent on providing low-income families and rural communities incentives to switch to renewable—or, at least more efficient—energy sources. Although estimates for exactly what price would be charged to the polluting businesses—or, “auctioned” in the wording of the bill—it is believed that this cap-and-charge mechanism could generate more than $1 billion for the State of Oregon by 2026. About half of those funds would be spent on transportation measures to reduce emissions; and, a third would go to utilities.

With an amendment to specify that the bio-fuel industry is not under the regulation, the bill already has moved out of the Senate Energy and Natural Resource Committee and to the Ways and Means Committee with a “do pass” recommendation.

On Friday, February 19 – Sunday, February 21, the Eco-Summit will be hosted in Ashland, a three day “citizen think tank” discussing various environmental and infrastructure considerations for southern Oregon. For a full schedule, TheEcoSummit.com.

A Prognosis for the Healthy Climate Bill: Better than a snowball’s chance of passing this legislative session