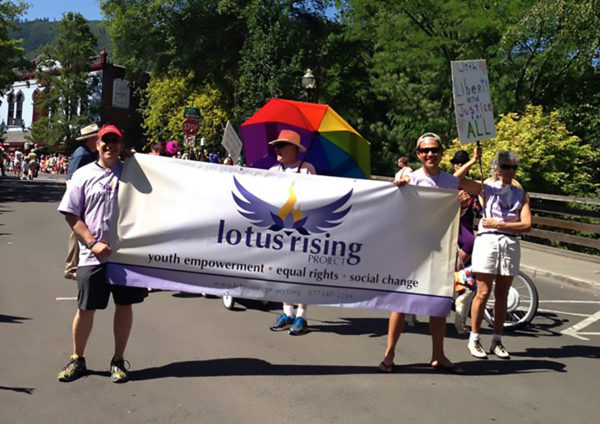 Pride 2017 is around the corner, and for the LGBT community in the valley, this annual celebration may be more important than ever. Just last year, a deadly rampage took the lives of 49 people and injured 53 others at Pulse, a gay nightclub in Orlando, shocking the world. Nine months ago, a conservative administration swept into power in Washington, DC, and began dismantling protections for LGBT citizens and same sex couples in the workplace, schools, and the military. For Lotus Rising Project, the local non-profit that orchestrates Pride alongside the efforts of many other local groups, this time of year is a welcome opportunity to look to the future and celebrate the LGBT community’s hard-won progress.

Lotus Rising Project’s co-founder and current executive director, Mario Fregoso, grew up in the Rogue Valley and was present at the group’s genesis over fifteen years ago. That earlier incarnation of the collective, Not Straight Not Sure, started in Medford in 2001 and provided a youth-initiated community for gay youth or young people questioning their sexuality. In Ashland, The Abdill-Ellis Lambda Community Center (named for Michelle Abdill and Roxanne Ellis, a lesbian couple murdered in Medford in 1995) was serving primarily adults. NSNS filled the gap. Youth attended from all over the valley, with meetings facilitated by an adult mentor, local therapist Delaine Due. In 2008, the group sought non-profit status and Lotus Rising Project was born. Two years later it was a sponsor of the area’s first official Pride parade, organized by SOPride.

Lotus Rising Project is still primarily focused on serving youth and young adults through four funded programs. NSNS’s mission transferred to the Sexuality and Gender Alliance (SAGA), where 14-24 years-olds meet for social and educational events and members-only gatherings facilitated by a therapist. Each year, SAGA organizes a popular, alternative prom for all ages at the Historic Ashland Armory. The Southern Oregon Gender and Sexuality Alliances Network (SOGSASN) works with students and advisors representing eight local schools’ support groups for LGBT youth, focusing particularly on issues of bullying. Rev Rising is a partnership with Planned Parenthood that offers theater-based and community-service youth empowerment programming, and Del’s House serves the whole community by providing emergency shelter, clothing, travel funds, and other services for those with critical needs. And, since last year, Lotus Rising has been the main organizer of Pride, taking the baton from SOPride. 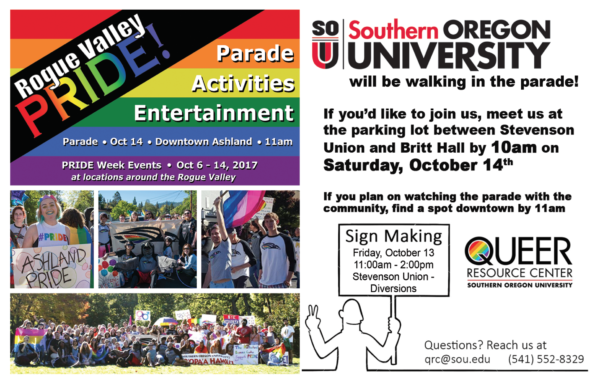 Coming up in January 2018 the organization will launch a new GSA Leadership Conference, pulling together youth, school advisors and school administrators from around the valley. “Advisors and administrators want training on how to serve LGBT youth in their schools and how to work with administration,” Fregoso told the Messenger. “We want to provide them with tools and knowledge they need to advocate for those students.”

Fregoso says that he has seen strides in LGBT acceptance in the valley since the 1990s, especially in schools, but there have been recent setbacks: “In the current political climate and with this current administration in place we’ve noticed that voice of opposition has been empowered to speak up, to push back, on the community.”

Recent research published by RTI International, an independent research institute, found that bullying of LGBT youth remains a persistent problem. As a group, these youth are 2-3 times more likely than their peers to be physically assaulted or threatened in school. RTI’s research found that more than a quarter of LGBT youth in their survey reported being harassed since the 2016 election.

Lotus Rising Project’s services are more in demand than ever, but as with most non-profits, funding is a constant concern. “Our presence is growing,” Fregoso told us, “the organization is growing, and demand for our services is growing. The challenge is finding adequate funding.” Fregoso and the group’s active board of directors, including Aisha Young, Evan Mouledoux, Lynzee Robinson, Shannon Webb, and president Page’t Yanelli, have had success with community campaigns, but most of its programs are funded through grants that pay for services, not staff. Expanding the staff is a priority for the organization.

Each year, Fregoso and Lotus Rising Project welcome Pride as a chance to highlight the persistence and creativity of the LGBT community, its rich local history, and the crowds of friends and allies who come out show their support, but the hope is that the event does more than just raise visibility: “The reason we celebrate Pride is to recognize the accomplishments and struggles of people that came before us,” Fregoso says, “and to bring about change in our community, in the nation, and around the world—wherever we have limited rights and are being persecuted. It’s important to acknowledge that. There is work to be done.”