A Multi-Colored Lens: A Photographer’s Unfiltered Perceptions in This Land 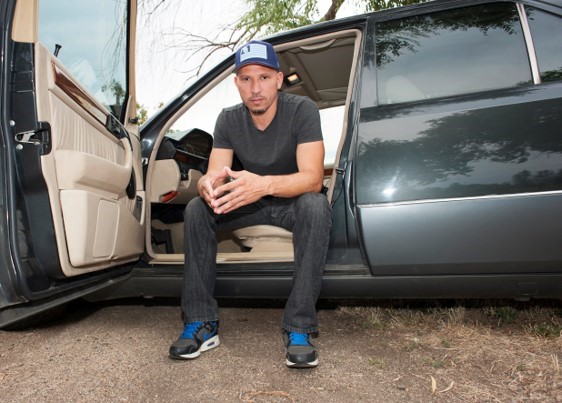 Photographer Ezra Marcos Ayala loves to capture the spirit of people. His compassion is palpable, pulling one behind his camera lens to see the world from his eyes, a world of color and diversity. When the call went out for submissions to Oregon Humanities’ online multimedia project, This Land, Ayala pitched his idea about living in America as an undocumented resident and was given the green light.

The Oregon Humanities theme sheds light on legal restrictions, individual challenges and triumphs for people of color in Oregon.

“It was a difficult thing,” he said. “This project was about humanizing (undocumented residents), and making them three dimensional. Unfortunately, we don’t live in that world where we see ourselves as one people, one planet. We’ve put up borders and we’ve created boundaries. And they’re people just like the rest of us, trying to make a better opportunity. We move for betterment. That’s what people do.”

His photo and audio essay, submitted in late summer 2016, originally called for photographing undocumented residents at their workplace. “After the election we knew it would’ve put too many people at risk,” he explained. “So I decided to interview and photograph these people in their home, and discussed what it is to live in this country undocumented; not only the emotional state of being accepted, but a sense of permanency, with regards to citizenship or residency, and with regards to ownership.”

He listened as people described their loss of hope and dreams while waiting years sometimes for legal systems to process their applications and their daily fears of being deported while they worked or went to school.

“I feel we have to create a path for the people who are already here,” observed Ayala, “a process that’s realistic and affordable. One of the things I hear people say is they need to come here ‘the right way’. Ellis Island! They didn’t do it the ‘right way’ either. Now, we celebrate St. Patrick’s Day! There’s an Italian restaurant everywhere. We’re making spaghetti, and we love pizza! We never think twice about those folks. Eventually, over time, we assimilate.”

Ayala’s grandparents were undocumented. “A few days after my father was born they went to Texas where he was christened and that allowed him to get a US birth certificate. My father received two masters degrees and served in the Vietnam war. My mother is Puerto Rican and an American citizen. She left Puerto Rico when she was young and earned a degree in education. It’s hard to leave where you come from. It’s what you know; your culture, your language, your food, everything you’re accustomed to. That tells you how bad a situation it is for some folk, that they’re willing to leave the country they’re from to come here, and want to stay here. This is where America could look at (undocumented residents’) situations and be humbly proud of our place in this world, that people are willing to leave their homeland to come here because they feel like they’ll have a better opportunity here.”

He began photography in 2008 in Florida while employed as a social worker. “I was doing portraits and weddings. And I think there was a genuine fear, especially in Florida, of showing black couples. I had a pretty diverse portfolio. It was crazy, there was this iconic cultural thing happening; you’d look at all the big names, our influences in pop culture, they were people of color! So black couples, Asians, Indians, it was just important, for me, that those people were represented even more. That’s what inspires me.”

In 2011 he started a full-time photography career and today shoots for clients like Time Magazine and Playstation. “I like to photograph different people of different backgrounds, in their typical environment doing their thing. I like to show them off as people.”

You can view Ayala’s photography at Ezra.Photo.

A Multi-Colored Lens: A Photographer’s Unfiltered Perceptions in This Land