Home»Screen»A Journey Through the Applegate: Two Hikers Blaze a Trail From Ashland to Grants Pass
Screen

A Journey Through the Applegate: Two Hikers Blaze a Trail From Ashland to Grants Pass 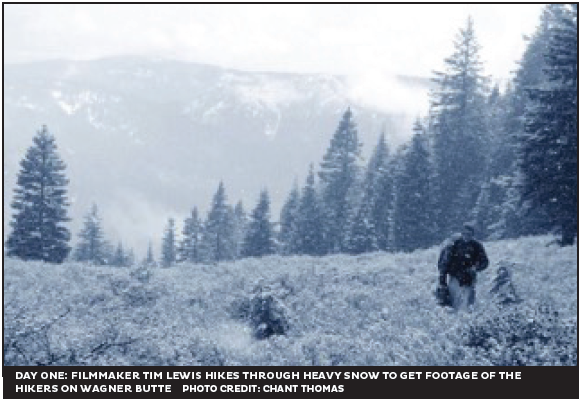 On May 28, two hikers ended their 80-mile journey at Cathedral Hills Park in Grants Pass. Luke Ruediger and Josh Weber had set out from downtown Ashland eight days prior and the path they followed was an imaginary line, a proposed route traversing the Applegate Valley. A documentary film about their thru-hike and the proposed Jack-Ash and Applegate Ridge Trails is currently in the works.

Ruediger and Weber are both board members of the Applegate Trails Association, a local nonprofit whose mission is to create and preserve non-motorized trails in the Applegate Valley. The ATA has been promoting the Applegate Ridge Trail—which would connect Grants Pass to Jacksonville—since its founding five years ago. They have been working in conjunction with the Siskiyou Upland Trails Association, a like-minded group that is spearheading the Jack-Ash Trail project. Together, the two trails will create a protected wilderness corridor linking Grants Pass to Ashland.

The ATA launched a Kickstarter page this spring in order to raise funds for the project. By May 21, backers had pledged over $6,000, which was enough to hire filmmaker Tim Lewis and his crew to help with the documentary. That afternoon, just thirty days before the summer solstice and three hours into the trip, Lewis filmed the two hikers walking into a snowstorm on Wagner Butte. Needless to say, tracing the route of the proposed Jack-Ash and Applegate Ridge Trails was no easy feat.

“It was a bit more of a wilderness-type experience than I was expecting,” says Ruediger. “The majority of the hike was off-trail, so there was a lot of route finding…trying our best to stay along the trail corridor as proposed. In some situations that was easier than others.”

The mostly trail-less route took them through road-less sections of BLM land, giving the trekkers a glimpse into the spectacular, untrammeled wildlands that lie on the fringes of our local communities. Two areas along the proposed route are currently designated as Lands with Wilderness Characteristics (LWC) by the Bureau of Land Management, but the BLM is proposing a new Resource Management plan that would open these areas—as well as other sections of the route not designated as LWC—to road building and logging. Building the proposed Applegate Ridge Trail will ensure that the region’s wildlife and biodiversity are protected from the urban sprawl and development that has already bled into so many wilderness areas along the I-5 corridor.

The Applegate Trails Association and the Siskiyou Upland Trails Association are cooperating with the BLM in order to move the trail building projects forward. The ATA is currently working on an environmental assessment for an eastern portion of the Applegate Ridge Trail that stretches seven miles from Sterling Creek Rd. down to Hwy 238. There will be a 30-day public comment period following the release of this assessment. “Although the trail groups are taking a leading role in planning, organizing and implementing these projects,” Ruediger says, “we’re also interested in getting feedback from the public and including them in the process as well.”

In fact, raising public awareness was the primary motive behind documenting the thru-hike. Lewis and the film crew met up with the hikers at specific locations along the way, while Ruediger and Weber used a GoPro to film the sections in between. “The idea is to walk them through the trail visually. The trail is surrounded by towns and communities that could benefit from it being there and we’re trying to show that to people,” says Ruediger, who plans to screen the documentary sometime in early October.

A Journey Through the Applegate: Two Hikers Blaze a Trail From Ashland to Grants Pass