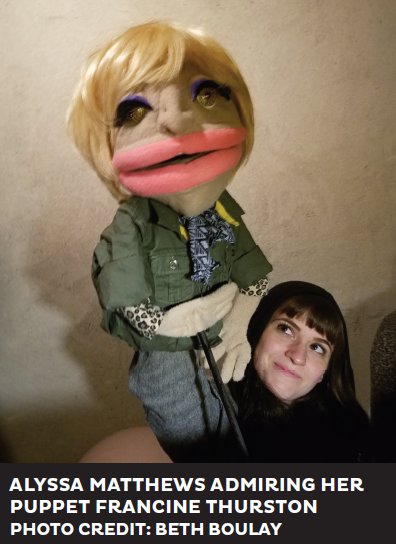 Sometimes you get the greatest combination when you pair the two unlikeliest things together––like the friendship of Legolas and Gimli in Lord of the Rings, syrup on bacon and eggs, or a kitten befriending a duckling.

Another unlikely pairing that actually works is H.P. Lovecraft’s Cthulhu and puppets. Yes, puppets. The troupe Puppeteers for Fears will perform its third adult puppet show, “Cthulhu: the Musical,” in a series of shows in Southern Oregon and Northern California spanning mid-October to early November.

The troupe wanted to do a show around Halloween, and Cthulhu was the right choice. Boulay says, “The musical is based on H.P. Lovecraft’s The Call of Cthulhu, in which a man follows his crazed uncle to the ends of the earth to find what horrors are driving them all mad.” Despite the story horrific undertows, director Beth Boulay also describes their production as a romantic comedy.

“You can say things with a puppet you can’t say in real life,” says Boulay. “There’s a separation from reality, and then a whole new reality all at once. People will listen to a puppet differently than a human being. You can actually see the point where they buy in a little more and believe that this thing is alive. But they know it’s not, and the puppeteer knows they are controlling the mechanism, so everyone is safe. And because everyone is inherently safe, we can push the envelope with themes like loss and fear of the unknown.”

“Puppeteers for Fears was founded in September 2015,” says Boulay. “Josh Gross (the Messenger’s Music Editor) wrote some Halloween themed puppet shows in Boise and wanted to do them here, but didn’t know any actors. Puppet was the magic word. We exchanged information, I got some actor friends involved, and about a month later we were performing our first show.”

That first show was “Ritual Murder: The Musical”––three one act presentations––followed soon after with “There’s Hair Down There” and “The Mummy’s Purse,” all written, composed, and directed by Josh Gross. In addition to directing Cthulhu, Boulay also directed “Cattle Mutilation: the Musical!” last spring.

“Most of my directing took place at Foothill College in the form of scenes and one-acts before coming to SOU’s theatre department for performance in 2011,” she says. “In 2012 I took a week-long puppetry workshop with Steven Ritz-Barr and went on to puppeteer in the school’s 2013 production of Avenue Q.”

“Every puppet teaches me something new,” says puppet maker Brook Sharp-Shapiro. Having 20 years of experience in costume design, transitioning to puppets was a challenge for her, but it was also something she discovered she was good at. “My absolute favorite part is when the puppets come alive,” she says. “When the puppeteer gives the puppet a voice and movement, that’s the best part for me, I feel like a proud puppet Mama.”

Stage Manager Sabrina Schmit hopes the audience is amused by the performance. “And I hope they can connect with the different characters,” she adds, “because as silly and whimsical as they can be in their own lovecraftian way, the actors and director have found a lot of humanity in them in different moments.” Though this isn’t Schmit’s first theatrical production, this is her first puppet show. “It’s been fun to figure out what this very unique show needs from me.”

Boulay says, “We hope the audience has a great time and a good laugh immersing itself in our world of foam and felt. Everyone has been working on making this a funny epic night the audience won’t forget.”