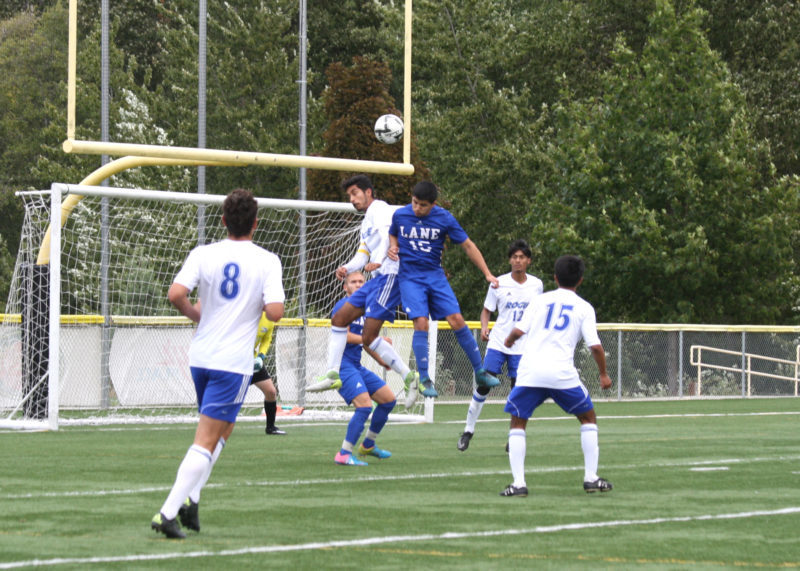 Down 0-1 last Saturday against Chemeketa (Salem) with under ten minutes to play, the Rogue Community College Men’s Soccer team pressed for a tying goal. Crosses and dribbling runs from forwards Stenley Graham and Jose Gallegos and midfielder Alejandro Velazquez flew into Chemeketa’s penalty area. RCC could not allow a second goal, but Chemeketa counter-attacked, a black-shirted player sprinting behind RCC’s defense with the ball.

Alex Thornhill, RCC’s freshman goalkeeper, raced off his line, the only obstacle to a game-ending goal with so little time left. He timed his dive, threw himself at the feet of the charging attacker, and smothered the ball. That moment of selflessness, effort, and skill epitomizes the 2017 RCC Men’s Soccer team. Although RCC eventually lost the game, this season already represents an overall victory, the formation of a team, not just in name, but in spirit.

“They focused on a singular message,” explains RCC Athletic Director, Darren Van Lehn. “They decided, ‘we can always control our attitude,’ and it has led to excellence.” The RCC Men’s Soccer program, in only its third season, has achieved a ranking as high as fifth in the Northwest Athletic Conference (NWAC) out of 24 teams and will participate in the NWAC playoffs. These are the usual measures of “success” in American sports, but they do not begin to capture the greater accomplishment.

“It’s a lot more fun this year,” says 2nd year player and captain, Trent Luebbert. From Corvallis, Luebbert, now 24, took some time off from school before resuming college at RCC. “We’re working hard toward our goals. We have a camaraderie that we didn’t have before.”

Greg Millick, the program’s founding coach, also cites a newfound focus as key to the team’s coalescing and, consequently, improving. “We implemented our ‘core values’ this year, and it was a really big step for us.” Millick, from Windsor, California, returned to the West Coast from Kansas City to start RCC men’s soccer. “Attitude, Balance, Effort, Focus, Winning Mentality. All five values have come together this season and really centered us. The ‘core values’ gave us something to hone in on. Everything else has been fun.”

Millick’s own persistence is perhaps also vital. Although Southern Oregon has plenty of potential college-level players, college soccer is not for every young adult. The transition to college poses a steep enough challenge without rigorous training and a major time commitment. Only 13 players lasted the entire first season in 2015, and only two of them returned for the second. The turnover, Millick admits, “was pretty upsetting.” He had to “recruit like crazy” to rebuild the roster. Millick praises second year player, Sebastian Tovar from Eagle Point, as the “model student-athlete” he hopes to continue to attract: “he’s very good on the field and in the classroom.”

When did the Ospreys go from a collection of guys playing soccer in white and blue uniforms to playing like Thornhill, sacrificing themselves for the team? Millick cites the September 23rd win, 1-0, at Chemeketa, a perennially strong NWAC program (and, based on October 21st’s intense rematch, a growing rival). “We defended for our lives the last 10 minutes,” Millick says. “When we won the game, I was excited, Ethann (D’Amato, Men’s Soccer Assistant Coach) was excited. But the players! The guys on the bench rushed the field like we had won a championship. It was probably the moment when the players mentally said, ‘We can do this!’”

That shift, from selfish individual (“I play college soccer”) to valued contributor to a larger group effort (“we are the RCC Men’s Soccer team”), will lead to the sort of meaningful experience Van Lehn, Millick, and RCC hope to offer all of RCC’s student-athletes. “We’re trying to create a culture that people will want to be a part of,” says Van Lehn. If all of RCC’s teams play with the heart of this year’s Men’s Soccer team, then RCC will be well on its way to achieving that objective.

Caption: Jose Mendoza challenges for a 50-50 ball at a recent game against Lane Community College at US Cellular Community Park in Medford.