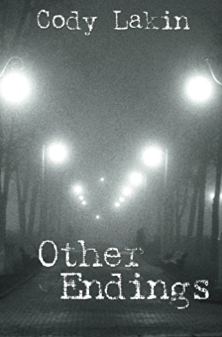 Ghosts come in so many shapes and sizes, as do the ghost stories we tell. Phantoms, echoes of lost lives, figures who may or may not actually be there, the kinds of stories to be told on a dark night can be enchanting or wonderfully chilling—and with central characters as disembodied as ghosts, why not embrace the freeform story structure? Really, the ghost story doesn’t need to rely on the jump-scare moment.

Cody Lakin is an author, freelance journalist and film critic who lives in Southern Oregon. (Check out some of his movie reviews  at FilmSnobReviews.com). He has published two books: Fairlane Road, and a darkly romantic ghost story titled Other Endings, a book I recently discovered.

Other Endings pivots on the story of Lester Halley, a moderately successful yet tormented young writer. After going through a disastrous break-up, Lester flees the States and finds himself wandering into Margaret’s Mourning, a charming but gloomy little hamlet in the U.K. that gives off a mysterious aura of…well, something. What follows is a journey of healing, ghostly encounters, horrendous crime, and a battle for the very soul of a haunted town.

The book’s narrative is a slow burn, a virtue for a ghost story, but at times, the pacing and prose occasionally repeats ideas and/or run-on sentences. Additionally, the book wears its literature and popular culture influences on its sleeve, which may either come off as charming and nostalgic, or as a bit too on-the-nose, depending on the reader.

I found myself rooting for the story’s primary romantic subplot. The two likable characters involved had equally likable chemistry, and the scenes they mingle provide a pocket of relief from the story’s darker moments.

Other Endings takes the old story mechanic of ghostly presences and phantoms, and explores the kinds of effects they can have on people who are sensitive or empathic to them. It is one thing to describe a ghostly encounter as “spooky” or “cold” and “dreadful.” It is another matter entirely to delve into what the ghost might be feeling in that moment, and how it affects the atmosphere and the thoughts of the person meeting said specter. In doing this, the ghost becomes more than simply the image of a person who has passed on, but provides the rare empathy for a ghost, and nods to the lingering cluster of memories and emotions, an echo of past regret, violence or tragedy. In each appearance throughout this story, the ghosts are, well, fully formed in that they are not only vividly described, but their emotional landscape is explored as well.

Other Endings indicates an author capable of great imagination and inspiration, but may not be everyone’s cup of tea. That is, this isn’t a beginner’s ghost story, but one more advanced and geared towards lovers of the genre.  It is more than a story that goes bump in the night, and one that further develops the tropes, and braves the misty shadows of pain and trauma.