A Dozen Plus One Local Stories: Josh Gross Produces The Lithia Water Diaries 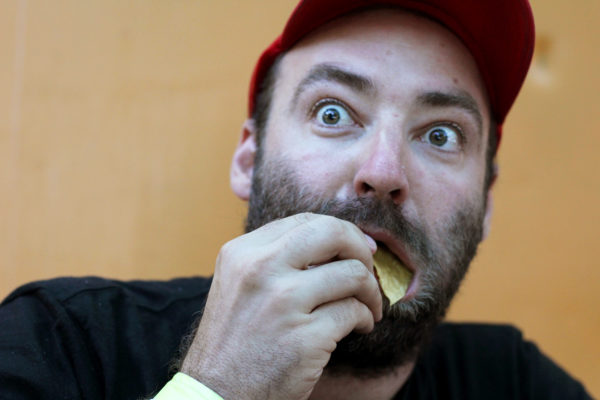 Rogue Valley Messenger: These are “based on true life,” correct? I mean, this isn’t open mic, just allowing people on stage, but you’ve scripted the stories?

Josh Gross: No, it’s not an open mic. That would be insufferably navel-gazing. The Lithia Water Diaries is a scripted play; thirteen interlinked monologues, each a fictional first-person slice of Ashland life with its own narrative arc. Some are funny, some are raw, some are bizarre, and some are shocking. Each is intended to be the sort of story that you wouldn’t be likely to encounter anywhere else.

RVM: Where did you come up with the stories? Did you interview people? How did you chose who to interview?

JG: No, there weren’t any interviews, just fiction writing. I made lists of local archetypes and the challenges that sort of character might face, and a second list of ways in which issues might challenge residents in a uniquely local way. Then I picked the most interesting ones, and let those characters talk.

Some of the issues the play touches on—such as the challenges of being queer in a small dating pool, or dealing with being evicted—were inspired by conversations with friends, or people I know or have met, but most are straight fiction I thought up.

RVM: I would think one of the challenges for a presentation like this is that you are trying to present “Ashland,” but in doing so, also you are presenting both some of the extremes and caricatures. Doesn’t that distort what/who “Ashland” is as well?

JG: Not really, because The Lithia Water Diaries isn’t intended to be comprehensive or definitive. The point was simply to depict uniquely local characters or situations in an impressionistic, not journalistic, fashion. It’s thirteen slices of life, not the entire loaf of bread they are being cut from.

That said, it is actually my sincerest hope for the project that someone who sees it thinks I got Ashland so wrong, that they then feel compelled to offer their own interpretation. I’d love to see this be an annual show that offers up a dozen new perspectives every time, each written by someone new. I don’t own the concept of local archetypes delivering monologues, and no one should wait for permission to create culture that reflects their experiences.

RVM: You point out that Ashland is rich in culture, but not its own. By that, I assume you mean Shakespeare?

JG: I mean that that it’s a town full of musicians, but when touring bands play here, venues rarely bother to put a local band on the bill or try to foster a local scene. I mean that it’s consistently ranked one of the best small towns to be a filmmaker, but few films and TV shows are set here or address our issues. I mean that most of our restaurants see it as their job to feed tourists, not locals. I mean that our newsmedia is primarily owned and operated from elsewhere, and little serious reporting is done on local issues. And yes, I mean that we are surrounded by theater, but most of it is written by dead people and starring actors from New York for audiences that drove in from California. We live in a town built for people that don’t live in it, so the available culture does not reflect the community, and the community does not reflect available culture. It’s a feedback loop of disengagement.

I care about people engaging with their community in a sincere and meaningful way through culture, and we are just far enough off the grid that that will only happen if we do it ourselves.

RVM: You also host Puppeteers for Fears. Easier or harder to work with live people on stage?

JG: This show is much easier to stage than a Puppeteers for Fears production. There is a smaller cast, no props or puppets, no musical numbers, no game of limbo going on out of sight to make it all happen. That’s part of the point. Doing a show like this is a nice vacation from the chaos of keeping a dozen human cartoon characters on task and singing in key.

RVM: You are busy. Writing. Puppeting. Music’ing. What next?

JG: Working on the national Puppeteers for Fears tour this summer. I’ve got us booked all the way to Santa Fe so far, so we’ll probably need to get the AC fixed in the tour van. Do you know a guy?

A Dozen Plus One Local Stories: Josh Gross Produces The Lithia Water Diaries