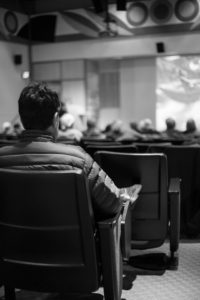 Sometimes the sum of things can be greater than their parts. For example: nature plus film equals the Fourth Annual Wild & Scenic Film Fest at the SOU Music Recital Hall on November 13. The Rogue Riverkeeper and SOU’s Outdoor Adventure Leadership program are the hosts of the event, eager to educate attendees about water issues within and transcending the Rogue Valley.

The Wild & Scenic Film Fest originates from Nevada City. “It’s a major fundraiser and event for an organization called the South Yuba River Citizens League,” says event organizer and Rogue Riverkeeper Director Robyn Janssen. “We’re showing a portion of their full film festival.” Though it’s the organization’s 14th year of putting on the event, it’s the fourth year it’s been around in Ashland.

“I wanted it to be just a fun, engaging way for people to learn about Rogue Riverkeeper’s work,” Janssen adds. “But with the hopes to inspire people, to become more involved in our work, and just become more involved in the region and our watershed. So, instead of come in, watch these films, go home, I wanted to add a lot of other pieces to that.”

What Janssen added was a Happy Hour entailing pizza and beer, as well as a silent auction. Informational tables will also be set up to educate about Rogue Riverkeeper’s campaign, including student-run groups to inform attendees about what’s happening at SOU. A keynote speaker kicks off the event, this year’s being local musician Alice Di Micele.

“She used to be a river guide on the Rogue, so she has this really deep connection with the river,” says Janssen.

Along with the festival being Rogue Riverkeeper’s largest event of the year, Janssen has organized the event every year. She says, “We would love to build it and grow it and move it around the Valley.” She says part of the festival’s purpose is “looking for ways for Rogue Riverkeeper to grow our support base and connect with the community and connect with the college. This is sort of the perfect opportunity to pull all that together. [It’s] a fun way for people to connect and be inspired.”

This year’s theme revolves around water issues and is titled “A Change of Course.” Water being the biggest issue Rogue Riverkeeper embraces, Janssen says, “I’m really hoping to create that dialogue around the scarcity of water and what we’re going to do as we move forward. All of the films I picked this year are related to water in one way or another.”

One of the films that will be shown at the festival is “36 Inches,” and is about the detrimental effects of exporting Liquified Natural Gas through Oregon and overseas. Director James Parker explains the pipeline issues in the short film that shows wonderful landscape shots of Coos Bay and more forested areas. Most of the films are short, ranging from five to 45 minutes, but all are educational, visually striking, and getting at the heart of water issues.

Janssen calls it “a fully packaged event,” and there’s no doubt that it will be. “It’s a great way to introduce people to your issues or movies that are focused on the types of issues you work on. To inspire them and to engage and get involved.”

Along with her enthusiasm to share these films with a large audience Nov. 13, Janssen urges attendees to purchase tickets ahead of time.