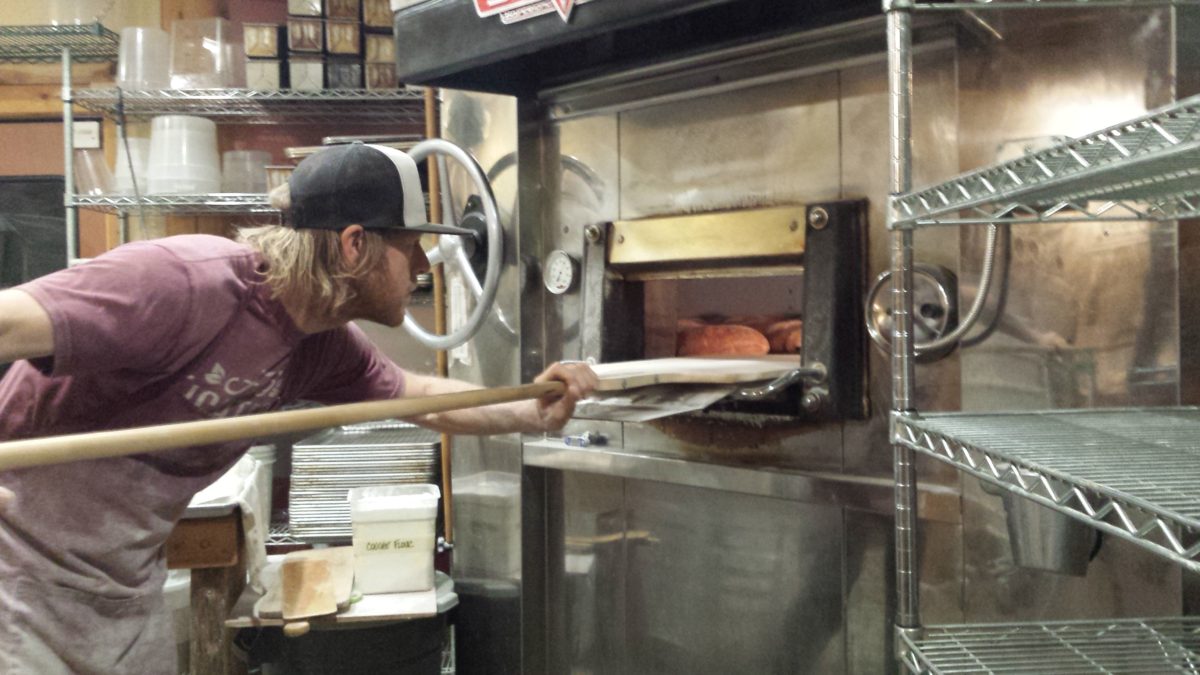 When Rise Up! Artisan Breads launched in 2007, it was a mailbox-only bakery. Owners Jo Ferneau and Rosie Demmin would bake 50 to 70 loaves of bread each week, then deliver it to neighbors’ postboxes.

Those early days helped the duo fine-tune the bread that buyers can find in stores, markets and restaurants across the Rogue Valley today. One example of this fine-tuning is the Little Applegate Sourdough, an intensely tangy, sliced sourdough. Originally it was called the San Francisco Sourdough. They quickly learned the name had to go. Ferneau recalls neighbors imploring, “You make this in the Applegate Valley, why do you call it the San Francisco Sour?” With a simple name swap, the Applegate Valley Sourdough was born, and is one of the couple’s best-selling breads today.

These days, Ferneau and Demmin employ 13 staffers and the company produces about 2,400 loaves of bread each week. Starting pay is at $11.25 an hour—something the couple is very proud of. “People deserve to make a living wage,” says Ferneau. With finances in the positive and most of the company’s loans paid off, Rise Up! has big plans to donate this year, including earlier this month—100 loaves were sent to Standing Rock, North Dakota, where thousands are protesting the Dakota Access Pipeline.

Currently, the bakery has five main breads: a ciabatta, a rustic levain, the Rogue Sourdough, the Little Applegate Sourdough and a sesame sourdough. Markets like the Ashland Food Co-op carry the main loaves. Customers will find the most variety at farmer’s markets though, which carry small-batch specialties that can’t be found at stores, like rosemary rolls.

Many of the markets have closed for winter, but Rise Up! does participate in Grants Pass’ winter market.

Rise Up! is located far from the foot-traffic of a city. It’s situated inside an intentional community off Yale Creek Rd., a gravel road which forks off of Little Applegate—a location that comes with its challenges, especially during winter. However, the bread almost always goes out. That’s the first rule of the trade, says Ferneau. “Don’t sit on your bread.”

Unfortunately, one day recently, the bread had to stay at the bakery longer than it was supposed to. Wind was the trouble in this case. With the predicted “storm of the century” knocking on the Rogue Valley’s door, the couple picked the safety of their staff, choosing instead to “sit” on their bread for 24 hours while the storm cleared.

The bakery is located in a 500-square foot octagon straw bale cottage that also includes a communal dining room, a lounge, and a loft. During the day sunlight soaks the buttercream walls, pouring in from the skylights. Demmin and Ferneau toss flour on their workspaces every few minutes, placing balls of dough on top, rolling them into their proper shapes. They sometimes switch positions with another worker, the third person placing the rounds onto sheets to rise. Flour particles float in the air, like the world’s tiniest snow, drifting towards the floor at a lackluster rate. Besides the sound of hands patting dough, the bakery is mostly quiet.

In the evening, things pick up. Demmin and Ferneau and the other daytime employee are joined by several more. Ferneau takes helm at the oven, where he’ll stay until the early hours of the morning. Carts of rising bread become so plentiful that the once spacious workspace becomes cramped. Conversation takes a light and occasionally nerdy tone, while over the speakers anything from Thriller to T.Rex bumps just loud enough to be heard outside the building. On this particular Friday, Demmin will finish her baking shift somewhere around 10 p.m. She’ll rise at 4 a.m. to slice and package the bread so that by 6:30 a.m., 300 of the night’s loaves can start their journey to the farmer’s market in Grants Pass.

For now, the Valley’s mini fresh-baked bread empire, or as they like to call themselves, a “micro-bakery,” has no plans for expansion. For them, there’s a point where balance and quality of life is more important than profit. That point is exactly where they’re at.

Available at local markets such as the Ashland Food Co-op and Cartwirght’s Valley Meat Co., as well as farmers’ markets. Also served in area restaurants such as Larks and Smithfields Restaurant & Bar.