Home»Wellness»4 Questions When Caring for an Aging Parent
Wellness

4 Questions When Caring for an Aging Parent 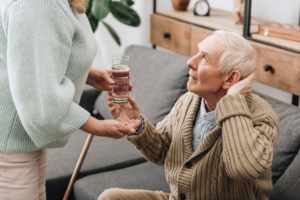 A time might come when you have a parent who can’t care for themselves as well as they once could. It happens to almost everyone eventually. When they get to this point in their life, you will presumably want to be there for them.

We will talk about a few considerations when you need to care for an aging parent right now.

Caring for an aging parent is your responsibility if no one else can do it. However, maybe you have other siblings who can help you with that task. You might also have another parent who’s still in the picture and doesn’t have much mental or physical decline.

If you know one of your parents isn’t in such great health anymore, you’ll need to sit down and talk to whoever else can help care for them. If that’s your other parent, involve them in any decisions you make. If you have a sibling, a spouse, or anyone else who can help your aging parent, they should be there as well.

You might talk about a schedule when you and any other capable adults can stop by and see the aging parent’s condition. Maybe you feel like someone needs to stop by their house or apartment every day. Perhaps you feel like checking up on them a couple of times per week is okay if they can still do most things for themselves.

What Do They Want?

You might also have a scenario where your aging parent cannot care for themselves as well as they once could, but they don’t want your help. That’s a tough situation, but if they’re capable of making their own decisions, and there’s no obvious cognitive decline, you have to listen to what they say.

Even if you feel like your aging parent can’t care for themselves as well as they once could, they might refuse any assistance. If that happens, you need to take their wishes into account.

It’s hard, but sometimes, you need to respect it when someone says to you that they don’t need anything from you. If a parent still has their faculties, and they flatly reject your aid, you have little choice but to give them their space.

Is Assisted Living or a Nursing Home a Viable Option?

Perhaps you have an older parent who’s still pretty spry, but the assisted living facility staff can prepare their meals, lead them in exercises, do their laundry, etc.

If you have only one surviving parent, you might look into these options. You could also have both parents move into an assisted living facility or a nursing home as well. Maybe they’ll agree to it if they feel like it’s the most logical move.

Can You Arrange for a Professional to Stop by Their Home?

Maybe you have an older parent who can’t do everything around the house that they once could. They do not want to move into assisted living or a nursing home, though. You also might not live close enough so that you can stop by to help them frequently.

You can look into hiring a home health aide who can stop by sometimes to help them with the tasks they need. They might remind your older parent to take their medication. Maybe they can help them with an exercise program or with some chores around the house.

That might be a middle ground to which your older parent can agree. They can stay at home, where they feel comfortable, but they can have someone stop by to help them when they need it.

If you communicate regularly with your aging parent about what they want for themselves, that’s usually the best way to handle it. You don’t want them to feel like you’re making decisions about them while cutting them out of the loop.

If they have experienced significant cognitive decline, you may have no choice but to start making decisions for them.

4 Questions When Caring for an Aging Parent