17 Blocks: The Best Documentary Ever? 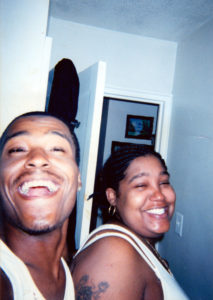 A remarkable archival project and an emotional rollercoaster, 17 Blocks was filmed over 20 years and tells the story about one family that lives in Washington DC, but more broadly about the problems and pitfalls for many poor black families in America. Living just blocks from the U.S. Capital, the family is far from opulence and power—a drug-using mom, a struggling older sister, a criminal brother and, at the heart of the story, a sweet young brother, Emmanuel, nine years old when the documentation begins, and 19 when he is murdered.

The details and stolen moments—with young Emmanuel goofing in front of the camera, with parents deciding what to eat for dinner, with the mom threatening one of her boyfriends with knife, with the mom passed out on her bed—make for a story that is simple and stunning at the same time. All told, 1000 hours of footage were distilled into less than two hours, and the result is a story—a lifetime, really—that moves along swiftly, but also gently and intimately; perhaps not surprising, given that the documentary is, in part, a project by journalist Davy Rothbart, who hosts a magazine Found, which, like its name indicates, shows “reality” by collecting love letters, notes, and other written tidbits and photos discovered on the sidewalk or lying around. In 1999, Rothbart met Emmanuel and his older brother Smurf at a pickup basketball game and started the project.

More so, the film expands what is too often just a 30 second nightly news story about a black man shot and killed into a full-bodied story about a complete life—warts and all—and about how one life affects generations. While many of the plot points are familiar and even feel cliché—drug use rotting a hole in a family; poor parenting creating legacies; and Emmanuel as a sweet, kind, empathetic, innocent kid removed from the street crime, and his murder completely senseless—the story and the lives are, of course, real and more complete than any Hollywood or primetime TV can produce. And, the emotional gut-punches even more painful.

Truly a remarkable film project and truly a gift for its insights, sensitivities and, ultimately, hope.

17 Blocks: The Best Documentary Ever?