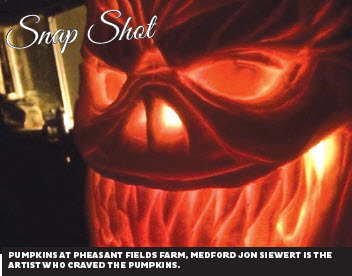 Submit photos of your sexiest or scariest Halloween costume, and win a prize: A $20 gift certificate to Uber Herbal. Don’t know what to wear yet? Check out our flow chart to help you decide!

Did you hear the one about the skeleton that walked into a bar, and ordered a beer and a mop?

Why did the zombie stop teaching?
He only had one pupil!

Why did Count Dracula get a subscription to the New York Times?
He heard it has great circulation!

I like your publication so much I would like to have it delivered to my home. Is that available?

Editor’s Note: Dan, flattery will get you everywhere! However, it won’t get you the Messenger on your front step. We distribute at local businesses only. We have a small, but fleet-footed delivery team, that gets the paper out each week. In fact, if you’d like to join the “team,” please send a note to Editorial@RogueValleyMessenger.com, and let’s talk.

Oregon is ALREADY the 2nd highest in the Nation for Personal income taxes!!!!! NO SALES TAX!! Why not just TAKE our blood!?!!! Geesh!‬‬‬‬

Actually we’re 3rd, but when you factor in that we don’t pay sales tax, we have an adjusted rate of 32nd. In a state where the largest industry is now tourism, surrounded by states with a sales tax, it is idiotic that Oregon doesn’t have one. Good for Grants Pass for trying. ‬‬‬

If Oregon had decent leadership, we could make this work by adjusting property tax on owner-occupied house, raising it on income-producing property and eliminating the income tax for everyone making less than $30K or or something. It’s just math.

Rally Mohawks, and bring your axes.

While proposing a sales tax that has no chance of passing and incurring the wasted expense of a special election, the City Council also voted to prohibit marijuana shops in Grants Pass, ignoring the tax revenue these would generate. A 30 percent tax could have been imposed on those sales, possibly generating as much revenue as this sales tax idea.

One of the best arguments in favor of legalization was economic, i.e. that marijuana sales could generate tax revenue for local communities (as opposed to spending money on attempts to enforce laws against it). You and I may not be interested in consuming marijuana, but who are we to tell other people that they can’t buy or use it? This is supposed to be a free country. Allow marijuana stores, tax the heck out of them, and quit talking about a sales tax that no one is going to vote for.

Re.: Stop and Listen (Don’t Shoot The Messenger, October 15)

As Michael Moore has noted, “Guns don’t kill people, Americans kill people.” Your comment that stricter gun control laws don’t work is only true in America, where “stricter” tends to mean any incremental improvement that is palatable to the NRA but otherwise inconsequential. In other countries gun control laws work just fine. And they don’t suffer regular horrific examples of mass murder followed by suicide. This is not a debate. It’s American insanity.