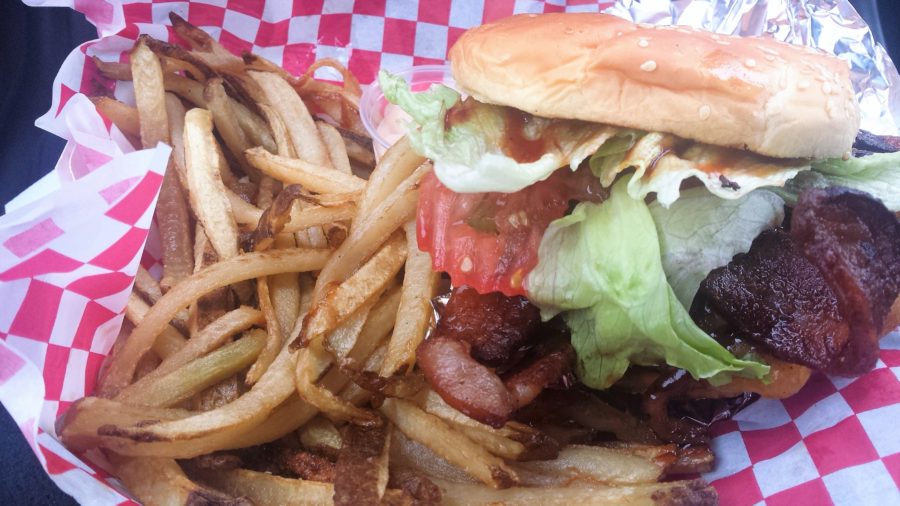 On a rainy day about a week ago, customers made their way towards a red food truck in a parking lot behind the post office in Grants Pass. At the window, owner Brian Callahan made talk with regulars, “Steve, I hooked you up,” he said, handing a paper bag out the window.

Five days a week, Valentino’s food truck parks in lot on 4th and F Streets in Grants Pass (also known as the “Growers Market lot since it’s where the Growers Market is held on Saturdays in warmer months). Opened in 2013, the truck is known for burgers, sandwiches, fries and onion rings.

Callahan owns Valentino’s with his wife, Laurie. It’s not his first foray into the service/dining industry. Callahan is of the Callahans known for Callahan’s Lodge and Restaurant. He managed the Ashland business from 1986 until it sold in 1996.

Callahan’s current venture fits into two parking spaces, four if you count the truck he uses to pull it. He says he loves the flexibility it gives him. On weekends he can take his business wherever he needs to for whatever event he’s catering.

At Valentino’s, one can get a bbq bacon burger with fries for $9. The burger comes on a seeded bun with crisp lettuce, thick slices of bacon, pickles, cheese and usually crisp onion rings. Sometimes Callahan runs out of onion rings and serves the burger with grilled onions instead. Considering the size of the burger, grilled onions only help the thing actually fit in a customer’s mouth better. On first bite, sweet barbecue sauce spills out the bottom, puddling into the container the burger is served in. 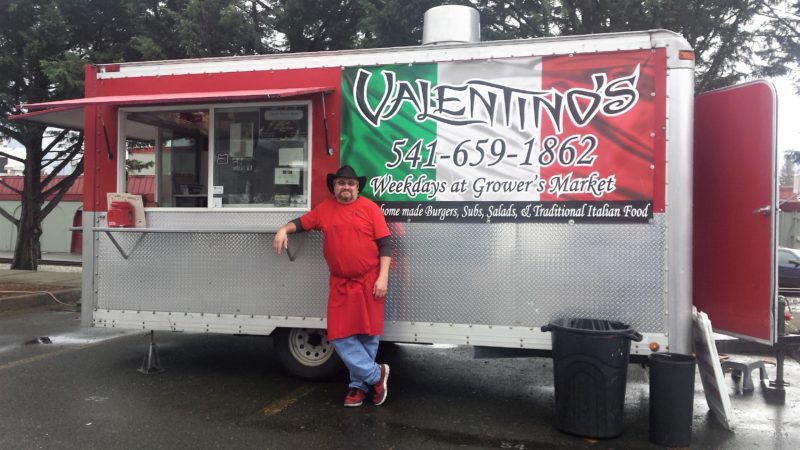 The menu also features several “meals” that come with a burger, a side (fries, onion rings, or salad). These meals are mostly $10 and under, save “The Godfather” (double meat, double bacon, double cheese), which runs at $13. We assume the extra charge is for insurance so that if someone has a heart attack while eating one, the business is covered.

The menu is short, between the burgers, sandwiches and kids’ options, but understandably so: when you put too many things on a menu with a small space and a small staff, wait times get out of hand. At Valentino’s wait times are spot on. A recent visit left just enough time to pick something up from the post office, a two-minute walk from Valentino’s.

When Red Robin and In-N-Out open in Grants Pass, they’re sure to draw large lines. If you want to duck a long wait but still grab a burger, stop by Valentino’s or one of the other Grants Pass joints like Jimmy’s or the Whitehorse Country Store. Eventually, the hype for the new places will die down, making it much easier for one to pop in and get a double double or a Whiskey River bbq burger with endless fries. However, based on the relentless line of cars and people at the In-N-Out in Medford, it could be 3028 before that happens…. but we’re patient, right?

Where: The Growers Market parking lot (4th and F Streets in Grants Pass)