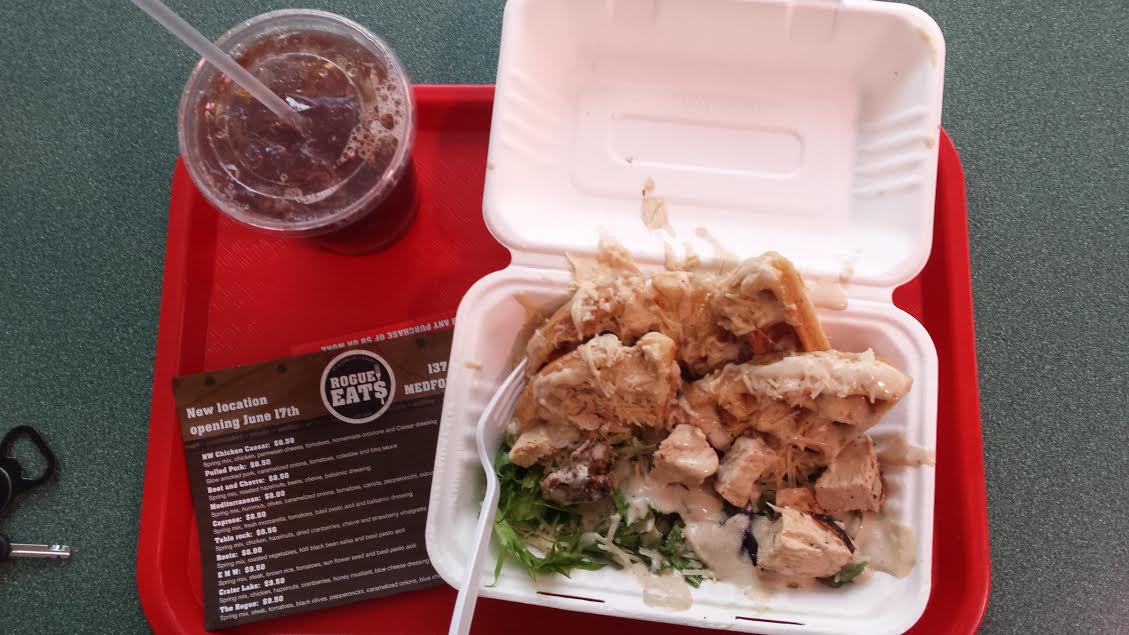 Ever thought to yourself: “I wish this restaurant would serve my salad atop a waffle”? Well, at Rogue Eats, you can have your salad any way you want it, including on a waffle. In fact, you can have your meal in a wrap, as a salad, on a bun, or in a rice bowl as well.

Rogue Eats seeks to serve “chef-minded,” made-on-premises food at affordable prices says owner Jesse Sword. The first Rogue Eats opened about a year ago in the Rogue Valley mall in a space formerly occupied by Basil & Berries, where Sword served as Chief Operating Officer. When Basil & Berries closed, Sword took his own savings and his years of experience working at Rogue Valley restaurants, including Applegate Lodge and the McCully House, and opened Rogue Eats. Six months later, he opened a second location in downtown Medford on Central Ave. The downtown location looks deceptively tiny and devoid of seating— perhaps big enough for 10 people to eat standing elbow to elbow — but is adjoined to a second room with tables for 20 or so.

Most everything on the menu rings in at $8.50 at both locations. Without extras like soda, sides, or a smoothie, it’s easy to stay on budget. Customers start by selecting their toppings. They can pick from house combinations such as pulled pork (pulled pork, caramelized onions, tomato, coleslaw, and barbecue sauce) or beet and chèvre (spring mix, roasted hazelnuts, beets, chèvre and balsamic dressing) or make their own creation using a list of toppings. From there, they can decide how they want their meal served: in a wrap, on a waffle, etc.

As a waffle lover, I visited twice and chose a waffle as delivery system each time, having both a Caesar salad waffle and a caprese salad waffle.

While tasty, the caprese waffle was not very photogenic. It arrived as a giant green and brown mess of basil aioli, greens and balsamic. Buried somewhere at the bottom were four pieces of waffle, slices of tender, juicy tomato, and soft, fresh-made mozzarella from the Bay area. It was a completely filling and satisfying lunch.

Likewise, the Caesar waffle was satiating and messy. The combination included a warm, round Belgian waffle that was sliced into four pieces then covered in a lake of Caesar dressing, and enough Parmesan to bury a small child. I ordered mine sans croutons and found the waffle made a fine substitute, providing both crunch and breadiness. I would have preferred a few more greens so I could have at least pretended I was being healthy. Lastly, the concoction contained huge chunks of charred, grilled chicken. A dash of seasoning, even just salt, and one minute less on the grill would have given the dish an extra edge and bonus points in my book. However, at $8.50, both the Caesar and the caprese waffles were good deals and easy picks over fast food any day.