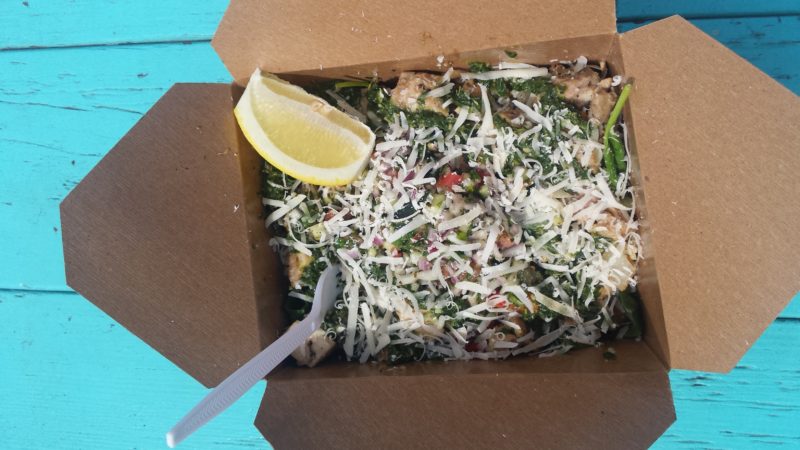 At Curbside King in Medford, $9-10 earns patrons a box of lunch large enough to double as a dumbbell. The food, cooked by Rogue Valley native William Snyder, is protein, veggie, and whole grain-centric (i.e. healthy). Some healthy food—ok most—is not exactly the taste bud-stimulating food that encourages the kind of gorging that, say, an endless nacho bar or cronuts inspire. However, on a scale of 1 to 10, with 1 being “this food is so boring I fell asleep 3 hours ago,” to 10 being about as un-boring as food can be, Snyder’s food rings in around a 9 or 10. The 27-year-old has nailed the art of making a multidimensional dish.

On my visit, I ordered the lemon rosemary grilled chicken, a dish Snyder says is one of his staple menu items. Each box comes with a large serving of cubed, grilled chicken tossed with veggies. On my visit, the medley included bright pieces of diced red and yellow peppers which, after a quick sear on the grill were still fresh and crisp. I ordered mine over rice (diners can have the mixture served in a burrito or in lettuce cups in that’s more their jam). A few leaves of fresh spinach joined the party late, their non-wilty texture surviving the heat of the meat thanks to a blanket of pesto and a chilled bruschetta of tomatoes, onion and cucumber. Over the confetti of colors and ingredients slightly curled shreds of Parmesan formed dozens of imperfect white lattices. A juicy wedge of lemon served as the final element of the dish. Spritzed on top, it added a zing that brightened up the meal. Somehow, Snyder had managed to put no less than 10 ingredients into a box, all mixed together, in a way that was cohesive, interesting, and filling. The one and only complaint I had was that the bright, healthy ingredients were weighed down by a little too much oil for my taste. 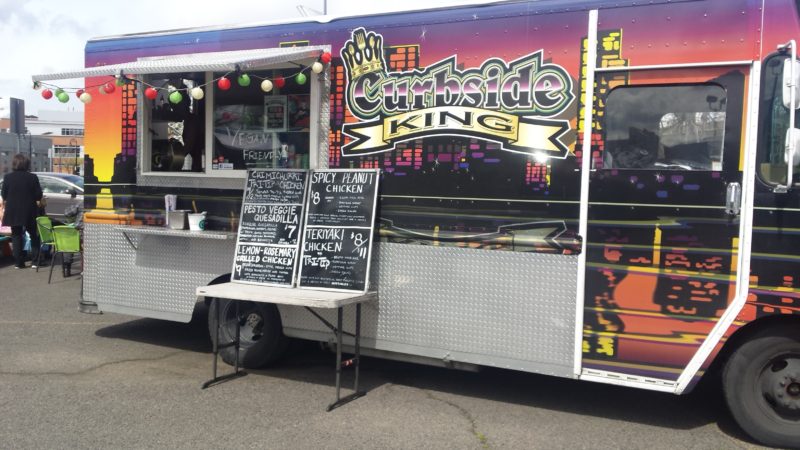 Inside the food truck door, I had watched Snyder piece together my order, one handed, while taking another order over the phone. His partner and fiancee, Heather Parks, put the finishing touches on the dishes and managed the front window, taking orders. The two both say things have gone overwhelmingly well so far. And they have. For starters, the couple works in a space not even large enough to hula hoop in, and they’re still set to get married in September. Besides the upcoming nuptials, the duo also has reason to celebrate, as the food truck was crowned Best Food Truck in the Valley in the Messenger’s reader’s choice awards this year. That’s not all, either. Snyder, who was working at a Buffalo Wild Wings, only dreaming of a food truck a little over a year and a half ago, was also voted the Valley’s best chef in this year’s survey.

Standing outside his truck in an oversized green Walkabout Brewing sweatshirt, he said the award was a curveball he didn’t expect.

Somehow, at less than $10, Snyder manages to stuff patrons full of healthy, interesting food. The kind of food that’s not too heavy, but filling and fueling — the kind you need when planning to take over the world or after a long workout. Or, for those ambitious eaters, it could make for a multitasking lunch workout combo: lift, bite, chew, lift, bite, chew….

Where: Mobile. Find it at the Great Eats of the Street Food Pod in Medford near 325 S Riverside Ave. 11-5 most Tuesdays-Saturdays and at wineries, breweries, health clubs and events.

Other comments: Vegan and vegetarian friendly