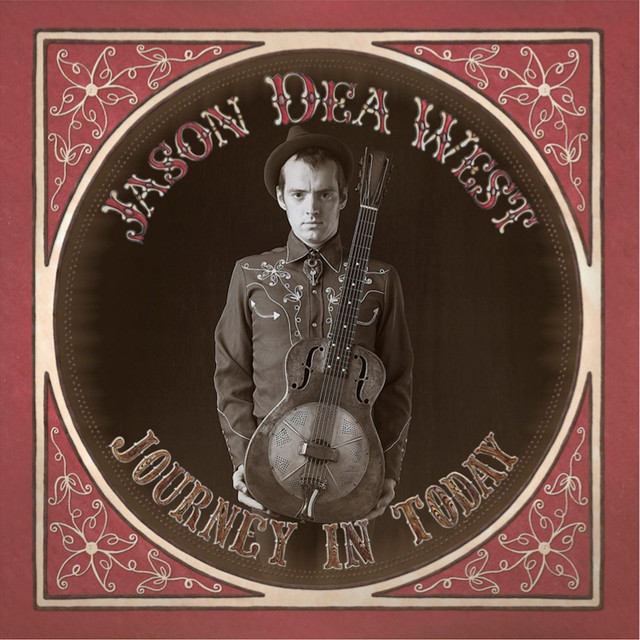 On the surface, drawing a clean line between the music of Intuitive Compass, and the solo work of guitar player Jason Dea West is a bit thorny. The warble of his distinctive voice and his deft finger-style attack on the resonator are the band’s Titanic-sized anchor, and that one-two punch is what anchors his solo work as well.

But the songs on West’s latest album, Journey in Today, released at the close of 2017, are—if not a totally different animal—a different breed.

Intuitive Compass pulls heavily from Vaudeville and klezmer sounds, heavy on minor keys and gypsy stomps; Journey in Today, is more American than Eastern European, with more major keys, and backing musicians that are definitely playing the fiddle, not the violin. And that’s to say nothing of the harmonica.

Lyrical themes are tweaked as well. While Intuitive Compass pulls its sound from klezmer, its lyrics often come from the tradition of Green Anarchist punk groups and extol the virtues of ending civilization and returning human society to a non-industrial balance with nature. That’s not the tach West takes on Journey in Today. For example, “Squeaky Old Car” is an ode to the that greatest of American traditions, a road trip powered by fumes in what Adam Sandler would have called a “piece of shit car.” It’s not hard to imagine this version being sung by the cast of of The Grapes of Wrath  as they coasted down the rockies towards California to preserve gas.

He sings about moonshine, hitching rides with truckers, the experience of leaving Colorado behind, rambling, hobo-ing, and many other classic themes straight out of the American mythbook. The lyrics are a western, a poem from the gilded age, and a series of tall tales, and they are both composed and delivered with the gravitas of someone that has lived just as much as studied the themes.

Old-time is a genre that’s kind of easy to phone in. There are countless songs that can be covered and passed on as original-ish work, and almost anything sung about whiskey or rambling sung over a two-step shuffle makes for a passable effort. What West does on Journey in Today is the opposite, attacking the genre without a touch of nostalgia, irony or kitsch. He’s deadly serious, and that sincerity makes every track shine, that perfect pairing of a unique unreplicatable talent, and a broader cultural identity.

Journey in Today is available on iTunes and Spotify, and can be purchased directly at live performances.