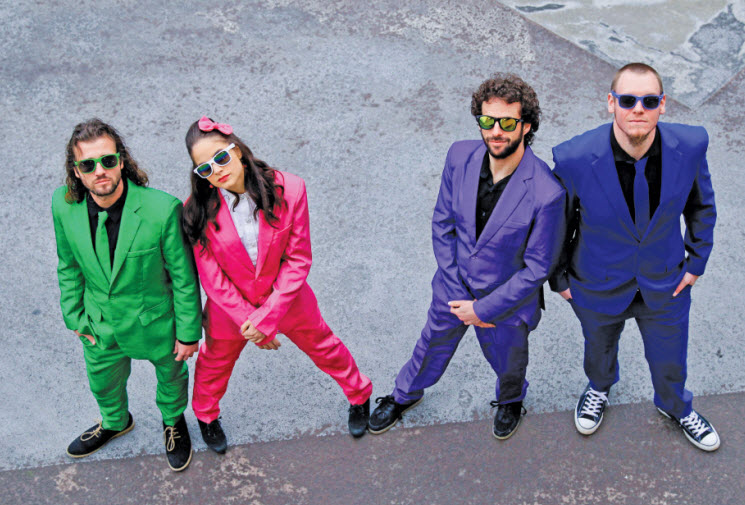 Eugene dance-rock quartet Fortune’s Folly have been turning fans into friends since their first show. And for the past four years vocalist Calysta Cheyenne, guitarist Ira Mazie, bassist Jesse Sanchez, and drummer Alex “Squatch” Koleber, have been playing up and down the west coast bringing friends into the “Folly Family.” This time around they will be playing two weekend shows; on Fri., January 19, at The Haul in Grants Pass and on Sat., January 20, at Howiee’s in Medford.

“We got together in 2014,” says Cheyenne. “The three guys were playing together for a year. I was moving to Eugene and wanted to be part of a project; and I went on Craigslist. The first song we wrote, we wrote via email. I moved up here and they had a jam space. And we started rehearsing and setting goals.”

After forming and writing their repertoire, the members of Fortune’s Folly began playing shows in the Eugene area and gathering a following.

“Our first show was in February of 2015. It was great; we had a great response. It’s the people, that really enjoy the music, that really make us want to get out there and perform.”

Not only do the members of Fortune’s Folly click as a live act, they form are creative songwriting force.

“We have a very smooth dynamic,” says Cheyenne. “We are good at bouncing ideas off each other. A lot of ease and flow to our writing process. Sometimes we have an idea. Most of the time we are just jamming, and see what happens.”

Fortune’s Folly have found the time to record and release three EPs in the past year. They have no immediate plans to record a full-length album, and prefer the EP format because it allows the band to have a steady recording output.

“We are going to head into the studio next month to start another one,” says Cheyenne. “It works well for us to group our songs in five. So we always have new content for our fans.”

Their latest effort the, Red, EP was released last summer. And was the first recording to include a ‘fifth Beatle.’

“We had [Parkpoom Aempoo] come in and play trumpet,” says Cheyenne. “He played on our track, “Through the Floor.” It’s the first time we ever contracted an outside musician.”

Cheyenne says he was brought in for some extra power to what the band saw as power songs.

The greatest bands have a signature sound; and it never hurts to have a signature look. The members of Fortune’s Folly are at the top of their game musically. And it is always entertaining to see a band playing sweaty dance-rock, wearing nothing but polyester.

“We perform with the suits on,” says Cheyenne. “We’ll probably be in the suits. We’ve been playing in the suits for a year now. They are super-gnarly; they don’t wash well.”