Home»Feature»Ashland Independent Film Festival»AIFF 2017»AIFF 2017- Answering Freedom: I Am Another You
AIFF 2017/Feature 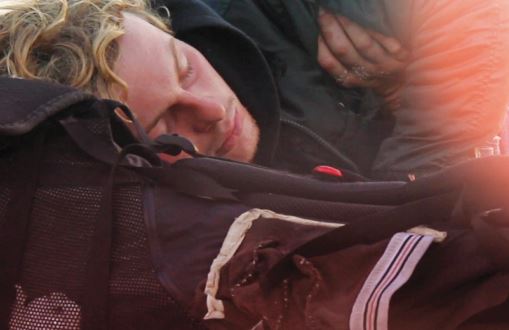 A young man forages through garbage for food, not caring about the smell or rotting fruit touching his skin. Grease coats his hair and a smile broadens on his face. He seems free.

I Am Another You is an eye-opening documentary about homelessness, mental illness, and how one person’s actions affect a family. Directed by Nanfu Wang, her own story plays an important part in the young man she’s documenting.

From China, she’s searching for true freedom. Throughout this journey, she runs into Dylan Olsen, who she decides to follow for a week with her camera. “I met someone whose mode of travel was different from anyone I ever knew,” Wang says in the film’s introduction. With no money and an empty backpack, Olsen explains to her how he’s been surviving as a transient.

Throughout Wang’s journey with Olsen, she learns about the simple life Olsen not only strives for, but lives. However, eventually she also learns his bad habits and his inconsideration that comes from trying to sell food right after it was given to him for free. Wang narrates how she began to resent Olsen, although those moments were often combat with empathy.

The second act of the film begins with Olsen’s father. In the beginning, it is easy to think this story will be consumed by the adventures of Olsen and Wang, but Wang begins to pan out and adds more layers to the story.

“No parent wants their child to be homeless,” says John Olsen, Dylan’s father. “I think when you’re a parent, you want your children to be kind of like you.”

Wang does a keen job representing Olsen’s home life as it was: full of love and support. It sets up an engaging tension, shaping questions about what pushed him to choose a life on the streets.

The final act of the film dives into Olsen’s past and current struggles with mental illness. Wang spends time with other transients he interacts with, many who bear their own mental illnesses. Despite his inconsideration and decisions to turn toward alcohol instead of saving money for a better meal, Wang shows the flaws he can’t avoid or grow out of that have been plaguing him most of his life.

Her filming is clear, objective, and ultimately finds her an answer for what freedom does and doesn’t mean.