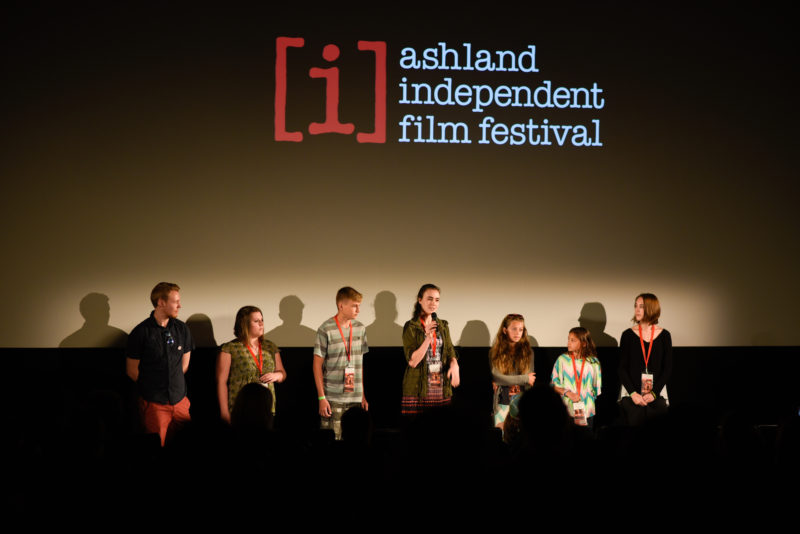 As patrons of a busy diner converse about a recent downtown robbery, a man takes a seat at one of the empty booths. A waitress comes to take his order, finding herself intrigued by the stranger, even enamored. When she later finds the bag of stolen money in the trunk of his car, he offers her freedom by inviting her to run away with him, a fugitive.

This Bonnie and Clyde inspired story is last year’s high school category winner Money Can’t Buy Me Love by Amelia Sorensen in the LAUNCH Student Film Competition. Since 2006, the Ashland Independent Film Festival has looked for ways to foster and encourage the younger generation in filmmaking through a film competition for those as young as five-years-old to college undergrads to submit their films.

“Students really have a clear point of view,” says Director of Operations Wendy Conner. “Back in the old days, I’m not sure [those who founded the competition] knew what direction it would be going in, but wanted to offer that component…to students to make it more of a holistic experience.”

Though submission rates have fluctuated over the years, Conner says an average of around 40 submissions doubled with over 80 last year. “It’s a good amount of fair competition,” she expresses. “We have a lot to fit in our programming.”

Last year’s winners consisted of a noir film, an environmental documentary, and a comedy. Conner was impressed by “the high level of professionalism, not only with the technical aspects of filmmaking but also thematically.” Last year’s 6-8 grade winner Quarter for a Dollar—It Takes More to Play a Game! by Aiden Hawes utilized sound effects and editing to deliver a comedic and light tone in just four minutes.

The competition includes seven counties, spanning from the Rogue Valley to northern California. Films must be five minutes or less, allowing for more screenings and not requiring too much from the younger viewers. “It’s really kind of a matter of where we can fit it into the program,” says Conner. The time limit also provides a structure to the young filmmakers. Conner adds the importance of editing the film down to a specific time and understanding the process of telling a story from beginning, middle, and end.

Adding an Education Coordinator to the AIFF team this year, Conner’s noticed more of a film education in schools, with teachers and sometimes parents helping their children make them. “There’s a presence there, whether it’s a teacher or parents,” she says. “We get some really amazing films made by elementary school kids.”

“A couple of the goals in mind was to help foster the students’ artistic eye,” says Conner. Combine that with challenging students to meet real world deadlines and explore another art form, it’s easy to imagine LAUNCH as a holistic experience.

Three community members are selected throughout the Rogue Valley to judge and select films for the competition. After discussing and rating the films, the jurors select them. “We typically go through the large group and we pull that into workable films the audience will like. It’s kind of a really fabulous way to be a rock star,” she says. “For a student to get their work out in the public and show it on the big screen, do a Q&A; they’re meeting other independent filmmakers. It just really excites [them.] It’s just attention and acknowledgement for your art.”

Five categories split up the competition between grades K-5, 6-8, 9-12, and college undergrads. Cash prizes are awarded to the selected winners in their respective age groups, one of those honors titled the Pride Prize, which will only be awarded to a high school or college undergrad. “We received a generous gift from the LGBTQ Juvenile Judgement Fund of the Equity Foundation,” explains Conner. “It allows students to really speak to the LGBT experience.”

Monday, January 6 is the final day films can be submitted. Along with free entries, any genre is accepted, such as documentary animation, drama, and more.

For more information about how to submit and about the competition as a whole, visit AshlandFilm.org